Towards an imaginal dialogue: archetypal symbols between Eastern Orthodox Christianity and Islam 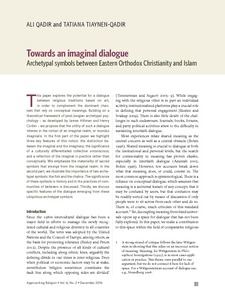 Ali Qadir, University of Tampere
Ali Qadir is post-doctoral researcher at the Tampere research group for cultural and political sociology, University of Tampere, Finland. He gained his doctoral degree from the same university, and has worked in academia and non-profit organizations internationally. His research centres on global & transnational sociology, as well as religious studies (especially in Islam), and he has recently been studying images and materiality in Islam and Orthodox Christianity. He has published widely, for instance in Sociology of Religion, Sociology of Islam, International Sociology, and the European Journal of Cultural & Political Sociology. Part of his research for this article was supported by an Academy of Finland research fellowship, Morality in Politics (SA296045), Ali Qadir Pl.
Tatiana Tiaynen-Qadir, University of Turku
Tatiana Tiaynen-Qadir is postdoctoral researcher at the Sociology Unit, University of Turku, Finland. She was awarded her doctoral degree in social anthropology from the University of Tampere, and has worked on a number of research projects and as a university lecturer in Finland and in Russia. Her research focuses on transnational anthropology of the family, religious studies, and the culture of therapeutic in modern Russia and Finland. She has recently been studying images and materiality in Islam and Orthodox Christianity. She has published in journals and edited volumes in Russian, Finnish, and English. Her research for this article was funded by the Academy of Finland project, Tracking the Therapeutic (SA289004), Suvi Salmenniemi Pl.

This paper explores the potential for a dialogue between religious traditions based on art, in order to complement the dominant channels that rely on conceptual meanings. Building on a theoretical framework of post-Jungian archetypal psychology – as developed by James Hillman and Henry Corbin – we propose that the utility of such a dialogue inheres in the notion of an imaginal realm, or mundus imaginalis. In the first part of the paper we highlight three key features of this notion: the distinction between the imaginal and the imaginary; the significance of a culturally differentiated collective unconscious; and a reflection of the imaginal in practice rather than conceptually. We emphasize the materiality of sacred symbols that emerge from the imaginal realm. In the second part, we illustrate the importance of two archetypal symbols: the fish and the chalice. The significance of these symbols in history and in the practices of communities of believers is discussed. Thirdly, we discuss specific features of the dialogue emerging from these ubiquitous archetypal symbols.