A brief history of Spiral Dynamics 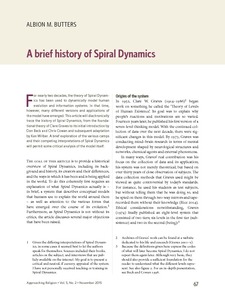 Albion M. Butters, University of Turku
Albion M. Butters PhD lectures in the Department of Comparative Religion at the University of Turku. While he is specialized in Indo-Tibetan Buddhism, his interests also include intersections between alternative forms of religion and cultural studies. He is currently writing a book on 'spiritual fiction': The Spiritual Evolution of Comics: The Birth of ‘Spi-Fi’.

For nearly two decades, the theory of Spiral Dynamics has been used to dynamically model human evolution and information systems. In that time, however, many different versions and applications of the model have emerged. This article will diachronically trace the history of Spiral Dynamics, from the foundational theory of Clare Graves to its initial introduction by Don Beck and Chris Cowan and subsequent adaptation by Ken Wilber. A brief exploration of the various camps and their competing interpretations of Spiral Dynamics will permit some critical analysis of the model itself.