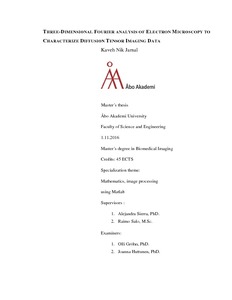 
Nik Jamal, Kaveh
Sierra, Alejandra
Salo, Raimo
Åbo Akademi University
This publication is copyrighted. You may download, display and print it for Your own personal use. Commercial use is prohibited.
Näytä kaikki kuvailutiedot
Julkaisun pysyvä osoite on
http://urn.fi/URN:NBN:fi-fe201706097103

Diffusion tensor imaging (DTI) is a highly sensitive MRI method that unveils the changes in brain microstructures. By estimating the movement of protons through different areas of complexity in the brain, DTI provides a remarkable contrast between white matter and grey matter fibers three-dimensionally (3D), as tissues differ in causing restriction to the movement of water protons. Particularly after neuropathology, DTI reveals significant changes in the measured parameters. However, the contrast provided by DTI, reflecting the organization of fibers is not clearly understood. In addition, there has been a gap thus far, in direct characterization of DTI due to limitations in planar images of histology. In this work, we first improved the two-dimensional (2D) histological characterization of DTI data. 2D Fourier analysis was applied to the digital photomicrographs of myelin and GFAP stainings in order to probe the changes that occur after status epilepticus in rats. It revealed a significant change in the fiber orientations and anisotropy after status epilepticus as compared to the controls in the CA3b region in the hippocampus, concurring with DTI results. With the aim of providing the third-dimension to the histological characterization, we implemented Fourier analysis in stacks of serial block face scanning electron microscopy (SBEM). It gives a distinct advantage of providing all the obstacles (membranes) for the water diffusion. Consequently, we obtained anisotropy and orientation for the grey and white matter in 3D at the same level of DTI voxels. After traumatic brain injury, we observed a remarkable decrease in 3D anisotropy, ipsilaterally to the injury both in the cortex and external capsule. This decrease was associated with an increase in the number of reactive astrocytes and axonal damage. The development of a novel method for 3D Fourier analysis of SBEM is the first step in the validation of DTI data for future studies focused on detecting the changes in brain tissue after pathological conditions.