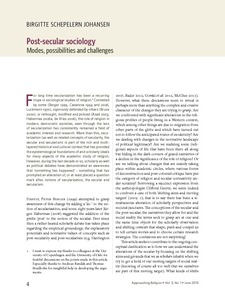 It is by now well known that the modern category of religion has evolved as part of a certain trajectory of Western history. Among its many aspects, this trajectory is about how religion became part of a definitive relationship with the category of the secular – a relationship that implies an understanding of religion as something distinct – and ideally separate – from other categories such as science, politics, and law. The place of the category of religion as part of this semantic as well as institutional landscape of separations makes it relevant to probe the possible consequences for sociology, if we are, as some scholars have argued, living in contexts which are increasingly post-secular. What happens, then, to the object – as well as the self-identity – of the study of religion? This article discusses some of the possible epistemological shifts inherent in the idea of a movement from secular to post-secular and it will reflect upon the possible avenues they open up for the sociological study of religion.