Atheism as culture and condition: Nietzschean reflections on the contemporary invisibility of profound godlessness 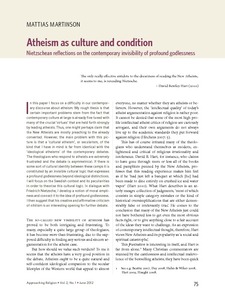 In this paper I focus on a difficulty in our contemporary discourse about atheism. My rough thesis is that certain important problems stem from the fact that contemporary culture at large is already fine tuned with many of the crucial ‘virtues’ that are held forth strongly by leading atheists. Thus, one might perhaps claim that the New Atheists are mostly preaching to the already converted. However, the main problem with this picture is that a ‘cultural atheism’, or secularism, of the kind that I have in mind is far from identical with the ‘ideological atheisms’ of the contemporary debates. The theologians who respond to atheists are extremely frustrated and the debate is asymmetrical. If there is some sort of cultural identity between these camps it is constituted by an invisible cultural logic that expresses a profound godlessness beyond ideological distinctions. I will focus on the Swedish context and its peculiarities in order to theorise this cultural logic. In dialogue with Friedrich Nietzsche, I develop a notion of moral emptiness and connect it to the idea of profound godlessness. I then suggest that his creative and affirmative criticism of nihilism is an interesting opening for further debate.