Dialectics or politics? Atheism and the return to religion 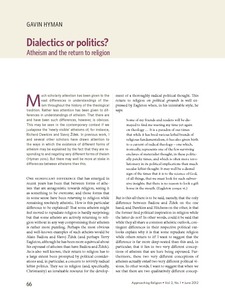 Gavin Hyman is Lecturer in the Department of Politics, Philosophy and Religion at the University of Lancaster, UK. He completed his doctoral dissertation at Peterhouse, Cambridge, and has taught at Lancaster for the past twelve years. He is author of The Predicament of Postmodern Theology (2001) and A Short History of Atheism (2010), and editor of New Directions in Philosophical Theology (2004).

Much scholarly attention has been given to the vast differences in understandings of theism throughout the history of the theological tradition. Rather less attention has been given to differences in understandings of atheism. That there are and have been such differences, however, is obvious. This may be seen in the contemporary context if we juxtapose the ‘newly visible’ atheisms of, for instance, Richard Dawkins and Slavoj Žižek. In previous work, I and several other scholars have drawn attention to the ways in which the existence of different forms of atheism may be explained by the fact that they are responding to and negating very different forms of theism. But there may well be more at stake in differences between atheisms than this.