Religion and atheism from a gender perspective 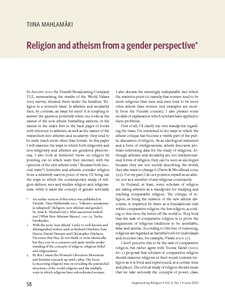 Tiina Mahlamäki, University of Turku
Dr and Docent Tiina Mahlamäki is Lecturer in Comparative Religion at the University of Turku, Finland. She is member of the executive board of the Finnish Society for the Study of Religion, and the co-editor-in-chief of Temenos: Nordic Journal of Comparative Religion. Her main research themes are: literature and religion, gender and religion (both religiosity and non-religiosity) and civil religion. She has recently written on Emanuel Swedenborg’s influence on Finnish national literature and on the Anthroposophical themes in the works of the Finnish female author Kersti Bergroth.

In August 2010 the Finnish Broadcasting Company YLE, summarising the results of the World Values 2005 survey, released them under the headline ‘Religion is a women’s issue’. Is atheism and secularity then, by contrast, an issue for men? It is tempting to answer the question positively when one looks at the names of the new atheist bestselling authors, or the names in the index lists in the back pages of books with reference to atheism, as well as the names of the researchers into atheism and secularity: they tend to be male much more often than female. In this paper I will examine the ways in which both religiosity and non-religiosity and atheism are gendered phenomena. I also look at feminists’ views on religion by pointing out in which ways they intersect with the opinions of the new atheist texts. Because both (second wave) feminists and atheists consider religion from a relatively narrow point of view, I’ll bring out the ways in which the contemporary study of religion defines, sees and studies religion and religiousness, while it takes the concept of gender seriously. I also discuss the seemingly indisputable fact which the stat­istics point to; namely that women tend to be more religious than men and men tend to be more often atheist than women (my examples are mostly from the Finnish context). I also present some models of explanation which scholars have applied to these problems.