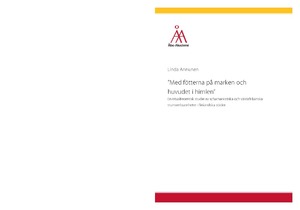 Most of us are familiar with the saying “actions speak louder than words”. As the saying implies, a lot can be read from a single action, but how are our actions made meaningful and significant? And what can be discovered when scholars focus their attention explicitly on a practice? A field of study that directly looks at practices and actions is ritual studies, which is also the theoretical foundation of this thesis. More precisely, this research contributes to discussions about rituals in a contemporary Western context. The study focuses on shamanistic drum circles and African drumming practices in contemporary Finland. In this study, I define these activities as rituals where a musical activity, in this case drumming, is given meaning and function by Finnish city dwellers. Furthermore, I illustrate how the meanings and purposes constructed around the drumming are perceived and utilized in the drummers’ everyday lives. The analytical attention is therefore particularly aimed at the practice of drumming, instead of studying broader beliefs, worldviews or lifestyles of the drummers. In short, this study asks: “how and why is drumming constructed as a meaningful practice?”, and “what do these drumming activities tell us about rituals in contemporary urban settings?”
The research is based on qualitative data consisting of in-depth interviews and field notes from participant observations, as well as different kinds of media material as additional data. Theoretically, the research provides new knowledge for the study of modern/new rituals and theories of ritualization. In this study I employ a new way to study rituals by combining Doreen Masseys’ theory of time-space with discourse analysis, and moreover by applying this method to the field of ritual studies. Therefore, the research illustrates how a spatial methodology is useful in the study of rituals. I regard this approach as especially suitable for studying the type of contemporary rituals that the drumming activities represent, i.e. rituals where aspects such as tradition, hierarchy and collectivity are both emphasized and valued. A spatial methodology helps to avoid the risk of explaining these rituals within a new-old or modern-traditional dichotomy, and instead approaches the studied ritual as an active component within a larger picture.
This research shows that rituals should not be understood as separate from the contexts they are practiced in. In other words, the city is not merely a backdrop for the drumming. Neither should the drumming be regarded as a result of the urban life. Instead, this study takes into consideration and highlights the dialogical process that takes place between the studied ritual and its surroundings. To emphasize this point, I conclude that the drumming activities represent a form of urban ritualization, which I then address in comparison to earlier theories of new/modern rituals. In particular, four main topics are critically examined in relation to earlier ritual theories: 1) entertainment and spirituality, 2) intense experiences, 3) authenticity and 4) collective individualism.
The conclusion of this study is that a spatial approach is useful for studying rituals both on a methodological and a theoretical level. Spatiality can thus be regarded as an effective and strategic way to emphasize and portray rituals as dynamic, social and multidimensional practices. With this discussion I demonstrate how spatiality can be used as a theoretical and a methodological tool to highlight the dialogical relationship between a ritual and the context it both affects and is affected by.