AMAP Human Healt : Biomonitoring and Studying the Nutrition of Mothers and Newborn in the Finnish Lapland 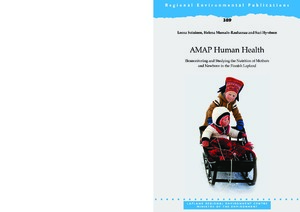 The Arctic Monitoring and Assessment Programme, AMAP is one of the Arctic Council’s four environmental programmes. The task of AMAP is to monitor and assess the levels and effects of anthropogenic pollutants in all components of the Arctic environment, including the human population.

The population living in the Arctic areas is in many areas dependent on the ecosystem of their environment and its food chains.

Developing offspring either in the foetal state, as newborns, or in the growing phase are the most sensitive to environmental pollutants. As a result, the targeted group in the AMAP human health project is expecting mothers and their newborn. A newborn infant is the final destination for fat-soluble environmental toxins.

The following studies of mothers blood and cord blood of the newborn in Northern- and
Eastern Lapland were conducted: mercury, lead, cadmium, selenium, zinc, copper, 15 different polychlorinated biphenyl compounds (PCB congeners), and 11 pesticides or persistent organic pollutants (POP) were measured. Arsenic and nickel were analysed from the maternal and newborn urine. The exposure to environmental pollutants was calculated by assessing the use of food stuffs of mothers.

The levels of toxic substances and calculated supply of them were low and no health risk was found. Some deficiencies in nourishment were found.