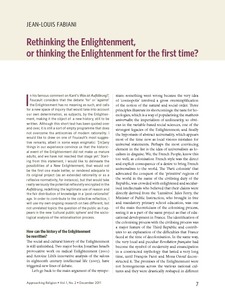 In his famous comment on Kant’s Was ist Aufklärung?, Foucault considers that the debate ‘for’ or ‘against’ the Enlightenment has no meaning as such, and calls for a new space of inquiry that would take into account our own determination, as subjects, by the Enlightenment, making it the object ofa new history, still to be written. Although this short text has been quoted over and over, it is still a sort of empty programme that does not overcome the antinomies of modern rationality. I would like to draw on one of Foucault’s most suggestive remarks, albeit in some ways enigmatic: ‘[m]any things in our experience convince us that the historical event of the Enlightenment did not make us mature adults, and we have not reached that stage yet.’ Starting from this statement, I would like to delineate the possibilities of a New Enlightenment, that would not be the first one made better, or rendered adequate to its original project (as an extended rationality or as a reflexive normativity, for instance), but that would take really seriously the potential reflexivity encrypted in the Aufklärung, redefining the legitimate use of reason and the fair distribution of knowledge in a ‘post-rationalist’ age. In order to contribute to the collective reflection, I will use my own ongoing research on two different, but not unrelated topics: the question of the public as it appears in the new ‘cultural public sphere’ and the sociological analysis of the rationalisation process.