Increasing the ecological connections and coherence of the Natura 2000 network in South-West Lapland 2012–2017 ; Report of the planning process 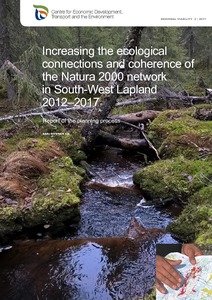 The objective of the NATNET Life+ project was to increase the ecological connections and coherence of the Natura 2000 network in South-West Lapland 2012–2017. The actions of the project were based on the actions presented in the report.
In terms of tangible actions, those crucial to the project included Zonation analyses, through which it was possible to map potential ecological connections within the project area. Based on them, actions could be targeted to areas in which they best advanced the project’s objectives. The role of briefings and counselling on natural values was significant in helping reach the project’s conservation goals, and the various conservation options received multi-channel marketing. A total of 116 permanent, privately owned conservation areas were established during the project under the auspices of the Metso programme. The total area covered by the conserved areas is approximately 2,800 hectares.
The project carried out restoration and nature management actions across more than 1,100 hectares of land used mostly for forestry, improving the biodiversity of the areas. Plans for restoration and nature management covering an area of 1,515 hectares were devised for the actions; these plans determined the aims of the actions as well as outlined the concrete restoration actions, assessed their impacts, calculated the expenses and determined the need for follow-up assessments. Additionally, nature management plans emphasising areal biodiversity values, covering an area of 5,000 hectares, were devised for private forest owners.
An inventory of all known calypso findings within the ecological corridors defined through the Zonation analyses was compiled in the project, and 210 new calypso sightings were made during terrain inventories. Information received from the inventories was utilized to locate potential areas for conservation as Metso habitats.