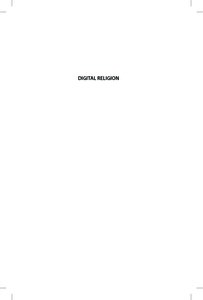 Minja Blom
Television vampire fandom and religion
Claire Clivaz
Digital religion out of the book: the loss of the illusion of the ‘original text’ and of the notion of a ‘religion of the book’
Yoel Cohen
Awkward encounters: Orthodox Jewry and the internet
Niklas Foxeus
Esoteric Theravāda Buddhism in Burma/Myanmar
Jenni Hokka
An instance of secularization? The Finnish online discussion
of the issue of same-sex marriages
Isabelle Jonveaux
Facebook as a monastic place? The new use of the internet by Catholic monks
Henna Jousmäki
Studying religious music at the grassroots level:
a look into the discourse practices of Christian metal bands online
Christiane Königstedt
New religious movements and alternative religions in France:
the use of digital media as a counter-strategy against social and legal exclusion
Nina Maskulin
On studying religion, the media and young people
Alexander D. Ornella
Of watchdogs and safe havens: control mechanisms and/in online sacred spaces
Jørgen Podemann Sørensen
Sortes virtuales: a comparative approach to digital divination
Dominik Schlosser
Digital hajj: the pilgrimage to Mecca in Muslim cyberspace
and the issue of religious online authority
Teemu Taira
Does the ‘old’ media’s coverage of religion matter in times of ‘digital religion’?
Ruth Tsuria
The video Three Things About Islam: Islamophobia online
or a religious dialogue?

The current volume of Scripta focuses on the contemporary interface between religion and new internet technologies under the heading Digital Religion. The aim of the volume is to explore the complex relationship between religion and digital technologies of communication from various different perspectives. The theme is topical, novel and vast and the current compilation of articles thus offers an insight into a theme that is likely to attract growing interest in the coming years.
The articles have been written by scholars from all over the world, representing the study of religion as well as social sciences and the humanities. Several of the themes represent new areas of investigation and build on thorough ethnographic research: religiously coloured discussions on the Internet, Facebook and religion, young persons’ relationships to religion online and new media to mention but a few. Digitalisation of ancient religious scriptures and digital forms of religious engagement—such as online hajj or digital divination—are also discussed among many other themes. Questions of power, change and authenticity arise in many of the articles, offering critical and illuminating assessments of the contemporary encounter between religions and the digital world.