Religion and the Body 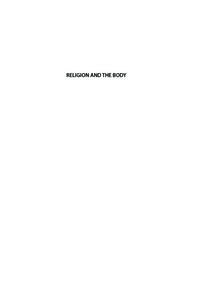 Jarl-Thure Eriksson
Truth, body and religion
Veikko Anttonen
The sacredness of the self, of society and of the human body:
The case of a Finnish transgender pastor Marja-Sisko Aalto
Madis Arukask
Resurrection, revenance, and exhumation:
The problematics of the dead body in songs and laments
Asma Barlas
Abraham’s sacrifice in the Qur’an: Beyond the body
Måns Broo
Defiled and deified:
Profane and sacred bodies in Caitanya Vaiṣṇava theology
Oren Ergas
‘Religion’ and ‘body’: Reclaiming the missing links of Western education
Céline Grünhagen
The female body in early Buddhist literature
Juha Hiltunen
Spiritual and religious aspects of torture and scalping
among the Indian cultures in Eastern North America, from ancient to colonial times
Tuija Hovi
Praising as bodily practice: The neocharismatic culture of celebration
Visa Immonen & Jussi-Pekka Taavitsainen
Finger of a saint, thumb of a priest: Medieval relics in the Diocese of Turku, and the archaeology of lived bodies
Jay Johnston
The body in Wellbeing Spirituality:
Self, spirit beings and the politics of difference
Isabelle Jonveaux
Asceticism: an endangered value?
Mutations of ascetism in contemporary monasticism
Sandra Junker
The disorderly body: Considerations of The Book of Numbers
and ritual impurity after contact with a corpse
Matti Kamppinen
The concept of body in religious studies
Jens Kutscher
Towards a solution concerning female genital mutilation?
An approach from within according to Islamic legal opinions
Göran Larsson
Islam and tattooing: An old question, a new research topic
Michelle Lelwica
The Religion of Thinness
Mikael Lindfelt
The body, religion and sports:
Through the lenses of postmodern religiosity
Mira Niculescu
Women with shaved heads: Western Buddhist nuns
and Haredi Jewish wives: Polysemy, universalism
and misinterpretations of hair symbolism in pluralistic societies
Peter Nynäs
Multiple bodies in the spirituality of the gay porn star McCree:
Reflections on corporeality and subjectivity
Jo Pearson
Embracing the lash: Pain and ritual as spiritual tools
Ferdinando Sardella
Religious experiments in colonial Calcutta:
Modern Hinduism and bhakti among the Indian middle class
Andrew Singleton
The rise and fall of the Pentecostals:
The role and significance of the body in Pentecostal spirituality
Sofia Sjö
Struggling bodies and body struggles:
Explorations of body and religion in contemporary Nordic film
Terhi Utriainen
The post-secular position and enchanted bodies
Malcolm Voyce
Buddhism and the formation of the religious body: A Foucauldian approach

During recent years, the body has become a central focus of religious studies. The understanding of religion as a solely intellectual practice of beliefs, norms and convictions is giving way to a broader understanding of religious subjects as contextually situated agents with a personal history, emotions, values, gender and – as is explored at length in this volume – a body. Religious and spiritual practitioners today seek a connection with the divine through their bodies, acknowledging the intimate connection between soul, mind and body on questions of human well-being, meaning-making and religious experiences. This may always have been the case in lived religion, but for scholars of religion the recognition of the body offers a fairly novel approach.

In this volume, the body as a theme for religious studies is presented and discussed in relation to several religious traditions including Judaism, Islam, Christianity, Hinduism and Buddhism as well as Contemporary Spirituality. The subjects dealt with include, among others, such varied themes as sports and thinness, gender identities, asceticism and charismatic rituals.