Researchers key in the movement toward Open Science 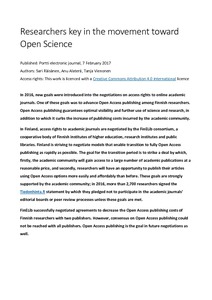 Translated version of a journal article published in the Open Science and Research Initiative's Portti electronic journal on 7 Feb 2017.

In 2016, new goals were introduced into the negotiations on access rights to online academic journals. One of these goals was to advance Open Access publishing among Finnish researchers. Open Access publishing guarantees optimal visibility and further use of science and research, in addition to which it curbs the increase of publishing costs incurred by the academic community.

In Finland, access rights to academic journals are negotiated by the FinELib consortium, a cooperative body of Finnish institutes of higher education, research institutes and public libraries. Finland is striving to negotiate models that enable transition to fully Open Access publishing as rapidly as possible. The goal for the transition period is to strike a deal by which, firstly, the academic community will gain access to a large number of academic publications at a reasonable price, and secondly, researchers will have an opportunity to publish their articles using Open Access options more easily and affordably than before. These goals are strongly supported by the academic community; in 2016, more than 2,700 researchers signed the Tiedonhinta.fi statement by which they pledged not to participate in the academic journals’ editorial boards or peer review processes unless these goals are met.