The Problem of Ritual 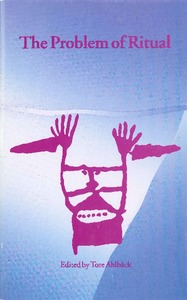 JØRGEN PODEMANN SØRENSEN
Ritualistics: a New Discipline in the History of Religions
TOVE TYBJERG
Wilhelm Mannhardt — A Pioneer in the Study of Rituals
JONATHAN HORWITZ
Shamanic Rites Seen from a Shamanic Perspective
ANTOON GEELS
A Note on the Psychology of Dhikr. The Halveti-Jerrahi Order of Dervishes in Istanbul
OWE WIKSTRÖM
Liturgy as Experience — the Psychology of Worship. A Theoretical and Empirical Lacuna
RENÉ GOTHÓNI
Pilgrimage = Transformation Journey
NORA AHLBERG
Forced Migration and Muslim Rituals: An Area of Cultural Psychology?
THOMAS MCELWAIN
Ritual Change in a Turkish Alevi Village
J. PETER SÖDERGÅRD
The Ritualized Bodies of Cybele's Galli and the Methodological
Problem of the Plurality of Explanations
LILIAN PORTEFAIX
Ancient Ephesus: Processions as Media of Religious and
Secular Propaganda
MORTEN LUND WARMIND
The Cult of the Roman Emperor before and after Christianity
ANDERS HULTGÅRD
Altskandinavische Opferrituale und das Problem der Quellen
JENS PETER SCHJØDT
The Relation between the two Phenomenological Categories
Initiation and Sacrifice as Exemplified by the Norse Myth of
(Ódinn on the Tree
MARIANNE GÖRMAN
Influences from the Huns on Scandinavian Sacrificial Customs during 300-500 AD
MIKAEL ROTHSTEIN
Rituals and Religious Innovation. The Meaning of Rituals in Shan the Rising Light
PETER BUCHHOLZ
Religious Foundations of Group Identity in Prehistoric Europe:
The Germanic Peoples
ALVAPPILLAI VELUPPILLAI
The Hindu Confrontation with the Jaina and the Buddhist.
Saint Tiruñanacampantar's Polemical Writings

Religious rites play a key role in most religions and spiritual traditions of the world. For researchers of religion they offer an especially prolific source of knowledge and data due to their empirical character – most rituals are acted out in one way or the other and can thus be observed. Ethnographic research from different contexts can, furthermore, be compared in a scholarly way, thus opening up greater possibilities for cumulative research.

Historical perspectives on rituals are presented in articles on ancient Greek and Roman cults as well as Germanic prehistoric customs and Norse mythology included in this volume. Theoretical perspectives are offered from psychological and methodological points of view and several contemporary practices from Hindu, Muslim, Buddhist and Shamanic contexts are analysed. By coining the term ritualistics, the volume also seeks to introduce a new paradigm for the study of rituals.