Spatial distributions of phytoplankton in rock pools : metacommunities to molecules 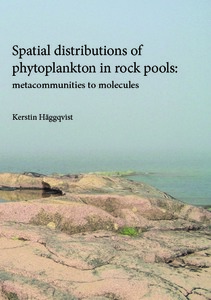 Ecological studies on how populations and communities assemble and function traditionally focussed on the effects of local environmental conditions and species interactions. Still, no species, the consequences of its actions or interactions, are confined to a single spatial scale. The importance of spatial processes, such as dispersal, immigration, emigration, habitat connectivity and availability, was eventually realised through metapopulation and -community ecology. Accordingly, species distributions are deciphered at large scales, whereas processes at small scales reveal the mechanisms behind the observed patterns.
Spatial distributions of microorganisms are generally considered to be wide, even global. This implies that fundamental patterns and processes, such as food web structures, primary production, or carbon cycling governed by these organisms are structured by local processes. Applying the metacommunity concept on microorganism assemblages has loosened the perception of them as closed systems strongly structured by local environmental conditions. However, uncertain species identities and dispersal modes impede the comprehension of their patterns and processes. Moreover, an anthropocentric scale is often applied on microorganisms. The scale of fundamental microorganism assemblage forming processes is generally difficult to perceive, leading to inappropriate extrapolations of small-scale patterns.
The papers summarised in this thesis assess spatial distributions of phytoplankton in rock pools. Rock pools form natural metacommunities. They have well-delineated boundaries, occur in high numbers within a limited area, and their species assemblages are connected by dispersal. The main aim of the thesis was to explore the mechanisms underlying observed spatial patterns. Descriptions of phytoplankton species, functional groups and traits were included. Variables structuring phytoplankton assemblages were studied at regional and local scales. Centimetre scale vertical distributions of phytoplankton were considered, which added a spatial dimension ecologically relevant for phytoplankton. Molecular properties of a species isolated from the rock pool habitat were characterised. Their potential ecological implications were considered, as molecular processes cannot be neglected in a mechanistic understanding of phytoplankton patterns. Finally, the importance of an ecologically meaningful sampled scale in phytoplankton studies was emphasised.
The phytoplankton assemblages in the studied rock pool metacommunity were characterised by acclimatising and colonising species adapted to a light abundant and well-mixed habitat. An overarching structuring effect of habitat stability on the phytoplankton assemblages was discovered. The effects of pool stability were not explained by mere local environmental conditions, as these were similar among the pools. Regionally, the observed distributional patterns suggested competition-colonising trade-offs. At this metacommunity scale, assemblages in stable pools were likely influenced by monopolising and priority effects, whereas effective outcompeting and colonising were important for assemblages among unstable pools.
Vertical distributions of phytoplankton implied a local structuring effect of turbulence, diverging between stable, deep and unstable, shallow pools. Despite well-mixed water columns, the vertical species-specific distributions were structured. Thus, by influencing fundamental community forming processes, small-scale turbulence non-randomly formed the local species assemblages, with implications at the metacommunity scale.
At the molecular level, the chemotypic characterisation of a rock pool species revealed production of bioactive compounds. The molecular effects, inhibition of enzymes present in both prokaryotes and eukaryotes, implied consequences beyond the individual scale. An ambiguous morphologic and genetic species identification exemplified the bottleneck in disentangling microorganism patterns. Furthermore, the unknown biological and ecological functions of the molecules demonstrated the difficulties in comprehension of their large-scale impacts.
Unexpectedly structured species-specific centimetre distributions in the well-mixed rock pools were discovered by precision sampling. Generalisations of such small-scale patterns with conventional phytoplankton sampling methods might lead to an underestimation of their effects at large scales.
Overall, the results in this thesis highlight the ineffectiveness of imposing a single spatial scale on microorganisms. A meaningful understanding of microorganism patterns and processes requires a widening of the traditional local scale, but also a comprehension that small-scale processes have importance for large-scale microorganism patterns. Throughout, the sampled scale should be non-arbitrarily considered. The findings in this thesis also exemplified the vulnerability of ambiently influenced rock pool ecosystems. The results can be considered in phytoplankton research and monitoring, as well as nature conservation and management.