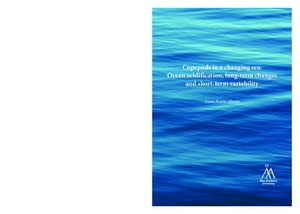 Almén, Anna-Karin
Åbo Akademi University
This publication is copyrighted. You may download, display and print it for Your own personal use. Commercial use is prohibited.
Näytä kaikki kuvailutiedot
Julkaisun pysyvä osoite on
http://urn.fi/URN:ISBN:978-952-12-3529-0

The rapid increase in atmospheric carbon dioxide is causing global warming but also changes in the ocean chemistry. When carbon dioxide dissolves in seawater it changes the carbonate chemistry towards lower levels of carbonate minerals and lowers pH, i.e., the water becomes less basic, a process called ocean acidification. This can have detrimental effects on many marine organisms. In eutrophic areas, such as the Baltic Sea, acidification is also caused by decaying organic matter as bacterial remineralisation releases carbon dioxide. Naturally, there are fluctuations in temperature, pH, and oxygen both with time and depth. In this thesis, I show that copepod zooplankton experience large daily fluctuations in temperature, oxygen and pH in a coastal pelagic area due to variability in physicochemical variables with time and depth and through their daily migrations in the water column. Further, I analysed monitoring data, and looked at the wintertime changes in pH, temperature and salinity in the Gulf of Finland during the past 36 years and found that all variables have changed. Sea temperature has increased and pH and salinity decreased.
Copepods are a vital part of the food chain as food for fish, and even small changes in their abundance could have far-reaching effects on the ecosystem. I studied the responses of two calanoid copepods, Eurytemora affinis and Acartia sp. to increased carbon dioxide and lowered pH in laboratory-based experiments using water and copepods from large mesocosms deployed in a coastal pelagic area in south-western Finland. E. affinis offspring production remained unaffected by carbon dioxide, whereas both food quantity in terms of phytoplankton availability and quality, as well as essential fatty acids of the copepod mothers, seemed to be important in regulating offspring production. Adult body size of Acartia sp. was reduced in high fCO2, corresponding values projected for the end of the century, which is alarming considering the negative effect of warming on copepod body size. An egg-transplant experiment with Acartia sp. revealed maternal effects, however, the maternal effects could only compensate for negative effects of intermediate levels of fCO2.
Based on the results in this thesis I conclude that although copepods are adapted to low pH on shorter time scales, there is a risk of negative effects of ocean acidification. Further, I discuss the secondary causes of acidification, and the importance of monitoring and management to reduce the negative effects on ecosystems.