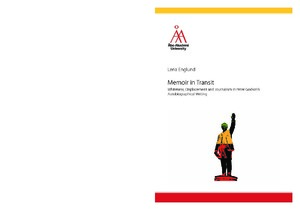 This dissertation is an examination of Peter Godwin’s three autobiographical works that relate to his life in Rhodesia/Zimbabwe: Mukiwa: A White Boy in Africa (1996), When a Crocodile Eats the Sun (2006) and The Fear: The Last Days of Robert Mugabe (2010). The memoirs raise questions relating to white Zimbabweanness, displacement, and the legacy of the colonial period. Controversy inevitably surrounds them as they are the literary products of descendants of settlers. A number of similar memoirs have been published since the land reform in 2000. Representing the nation in literature and writing specific versions of history emerge as problematic aspects of this literature. Most of the writers no longer live in Zimbabwe and they often write for an Anglo-American audience. Godwin’s memoirs forge a new tradition of white Zimbabwean literature, one strongly preoccupied with discourses of childhood, nostalgia, and loss. He also goes beyond such notions in his writing and a clear development is visible in his memoirs, which makes a study of them worthwhile.
The three memoirs occupy themselves to a large extent with history, politics and also personal identity. Having been born to European settlers, Godwin’s complex position as a white Zimbabwean is cause for much grief and pain, and also confusion with regard to his past, present and future. The results of the analysis show that the complexity of Godwin’s memoirs allows for a thorough investigation of this genre of writing and enable going beyond previous studies and criticism. My analysis also points to problems in the theoretical framework, for example with regard to various concepts such as diaspora, which is often too broadly used and defined. This study of Godwin’s memoirs also brings forth questions about the future of postcolonial literature, where African literature is going and what defines it, as well as autobiography’s role as mediator between the past and the present. This is a central struggle in Godwin’s writing, one which also includes the difficult balancing act between the personal and the professional dimensions of his life.