Ocean acidification in the Baltic Sea : implications for the bivalve Macoma balthica 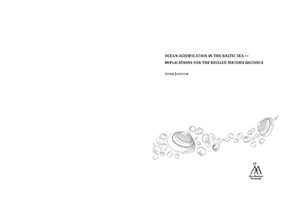 The Baltic Sea is one of the most human-impacted sea areas in the world and its ecosystems are exposed to a variety of stressors of anthropogenic origin. Large changes in the environmental conditions, species and communities of the Baltic Sea are predicted to occur due to global climate change, but the extent and magnitude of the future changes are challenging to estimate due to the multiple stressors simultaneously impacting the system. As an additional threat, future ocean acidification will play a role in modifying the environmental conditions, and these CO2-induced changes are predicted to be fast in the Baltic Sea. This is especially of concern for the species-poor, but functionally essential benthic communities where key species such as bivalve Macoma balthica live at the limits of their tolerance range, and are already regularly disturbed by environmental stressors such as hypoxia. Currently, only very limited knowledge about the effects of future ocean acidification exists for this species.
The overall aim of my thesis was to develop an understanding of the effects of CO2 increase on the vulnerability of Baltic Sea key species, and how this is related to other effects of climate change, e.g. an increase in bottom-water hypoxia. Specifically, I investigated how different life stages of the infaunal bivalve M. balthica could be affected by future ocean acidification. Survival, growth, behaviour and physiological responses were assessed in a combination of laboratory and mesocosm experiments by exposing different life stages of M. balthica to different pH levels over different time periods depending on the life stage in question. While some life stage-based differences in vulnerability and survival were found, the results indicate that reduced pH has a negative effect on all life stages. In larval M. balthica, even a slight pH decrease was found to cause significant negative changes during that delicate life stage, both by slowing growth and by decreasing survival. Other observed impacts included delayed settling of the post-larvae and increasing energetic demand of adult bivalves.
The results suggest consistent negative effects at all life stages with potential major implications for the resilience of M. Balthica populations, which are currently under threat from a range of anthropogenic stressors such as increasing hypoxia. The kind of experimental studies conducted in this thesis are useful for pinpointing mechanisms, but they are always simplifications of reality, however, and are usually conducted over time scales that are short in relation to the time scales over which ocean acidification is affecting populations, communities and ecosystems. To fully understand and to be able to estimate how the complex ecosystems are about to change in the future, incorporating more of the biotic interactions, impacting stressors and relevant environmental conditions are needed for increasing the level of realism in the experiments.