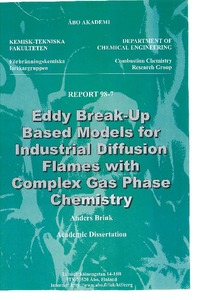 In this thesis, two types of models used in the CFD modeling of practical combustion devices with a turbulent flow are investigated. The models are applied to a number of test cases, but the goal of the investigations are not to demonstrate the ability of the models to simulate practical devices but to investigate them, as well as to propose improvements. The investigated models are all related to the Eddy Break-Up model, but they differ from each other in that one group utilizes the perfectly stirred reactor in the description, whereas the other group compares the reaction rate given by mixing with a kinetically determined reaction rate. The models in the first group are based on the Eddy Dissipation Concept. These models allow for the use of a comprehensive reaction mechanism. In the studies, it is found that the mixing time used in this model is too short to be consistent with the other assumptions the model is based on. The test cases used in the study of this model could be better described if a longer mixing time was used. It was, however, found that there is a connection between the description of the reaction kinetics and the mixing time giving the best results. Finally, a new version of this reactor based model was proposed, where suggestions reported in the literature on how to estimate the mixing time as well as the reacting fraction in a turbulence-chemistry interaction model for the modeling of non-steady spray combustion have been applied. The second group of models consists of various versions of the Eddy Dissipation Combustion Model. In this study, it is found that these models are as reliable as the Eddy Dissipation Concept for the modeling of the main combustion, although the reaction kinetics must be described with simplified mechanisms. It is further found that basing the calculations of the reaction rates on mean quantities is a reasonable approach in hydrocarbon flames. Last, a modification to the Eddy Dissipation Combustion Model is proposed, where a temperature pdf is used in the estimation of the reaction rate determined by the reaction kinetics.
In most CFD simulations of practical devices, one is forced to use a simplified description of the chemistry, where only a very limited number of global reactions are used to describe the complicated chemistry. To identify to what extent the simplified description of the chemistry restricts the reliability of the modeling, perfectly stirred reactor simulations are used to assess the frequently used simplified mechanisms by comparing the results with those obtained with a comprehensive reaction mechanism consisting of elementary reactions. It is found that the oxidation of the fuel can be described with a four-step mechanism. However, none of the tested simplified mechanisms for the nitrogen chemistry were reliable. The perfectly stirred reactor was also used to study the effect of temperature fluctuations. For this, the transient behavior of the reactor was modeled. Here it was found that apart from the formation of thermal-NO, the conversion of NH3 to N2 at fuel rich conditions was also strongly affected by temperature fluctuations.