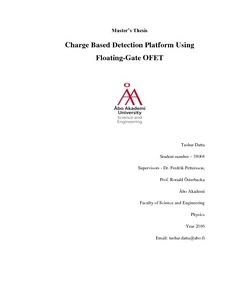 The integration of biological molecules to organic semiconducting materials can revolutionize biomedical industry because it has an enormous potential of developing new types of organic bio-electronic devices such as biosensors which are cheaper, more flexible, eco-friendly and bio-compatible. By using solution processable organic (polymer) materials and non-toxic solvents, these devices are not only environmentally friendly, but also R2R-processing compatible and give more flexibility for large area fabrication and design. The electronic properties of biomolecules with the versatility of conductive organic polymers have opened a new era of bio-electronics. Various kinds of organic field-effect transistors (OFETs) have been carefully researched and extensively studied over the last decade and upon development can now compete with silicon technology in terms of performance and quality in some areas. Biosensors belong to this area and with a much better understanding of OFET’s, this area can now be explored thoroughly and can produce beneficial results in terms of disposable biosensors for medical care. Here I have tried to develop a ‘floating-gate’-enabled OFET-based platform to detect charge based analytes in an aqueous medium, which can subsequently be used to detect protein post-translational modifications (PPTM), which is an important marker for various health-related issues. I have utilized the R2R- compatible aluminum (Al) OFET with chemically anodized aluminum oxide (Al2O3) as gate dielectric and the atmospherically stable organic semiconductor poly (3-hexylthiophene) (P3HT) as active layer. The performance of the OFET was further improved by adding an insulating silane self-assembled monolayer (SAM) on top of the ultra-thin Al2O3. Using octadecyltrichlorosilane (ODTS) as SAM, this transistor model was able to operate at -4V and had an on/off-ratio on the order of 100 and a sub threshold swing of 130 mV/decade. The completedprecursor platform was able to detect deposited charge to some extent but more thorough analysis and measurements needs to be done in future to clarify the outcomes.