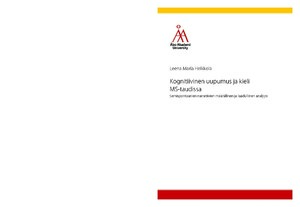 There are not many linguistic studies on language disorders in multiple sclerosis (MS). The effects of cognitive fatigue on language in MS have not been studied at all. In this study, cognition, language, and their correlation will be investigated. The main object of the study is to investigate, whether there is a possible link between cognitive fatigue and language in MS. In addition, the possible link between linguistic cognition and language will be studied.
As the neuropsychological data of the study, the results of a wide neuropsychological test battery will be studied. The linguistic data consists of three semispontaneous narratives produced on the basis of three picture books (Frog Stories). The language will be studied as fluency (length, number of words, number of syllables, and speech rate), as well as coherence (global connectedness, main theme, and content analysis).
As participants of the study, 20 persons with MS, and 21 healthy controls, were investigated. MS group was further divided into groups. In the study, groups with milder (n=10; EDSS <5.5) and more serious (n=10; EDSS 6.0-7.5) MS were compared. In addition, groups with relapsing remitting (n=13) and secondary progressive (n=7) MS were compared.
According to the results, cognition in the MS group was impaired compared to the control group. MS group’s linguistic cognition was partly intact, although linguistic reasoning, as well as learning and memory were impaired. MS group showed cognitive fatigue when assessed both subjectively and objectively. Groups with milder MS showed partly more cognitive impairment than groups with more serious forms of MS.
MS group’s fluency was impaired compared to the controls. Fluency was especially impaired within and between narratives. Based on content analysis, MS group told more incorrect content units than the control group. On the other hand, MS group performed better than the control group on global coherence of the narrative. Groups with milder MS performed better regarding fluency and coherence of the narrative.
There was a correlation between objective cognitive fatigue (reaction time) and the length of the three narratives in the MS group. Also, there was a link between experienced tiredness in speech production and narrative coherence. There was also a link between the fluency (speech rate) of the narrative and recall of linguistic material. Additionally, there was a link between narrative fluency (length) and semantic word fluency. However, there was no link between narrative coherence and linguistic cognition. Groups with more serious MS had somewhat more links between cognitive fatigue and language than groups with milder MS.