Phosphorus in the sediments of the northern Baltic Sea archipelagos : internal P loading and Its impact on eutrophication 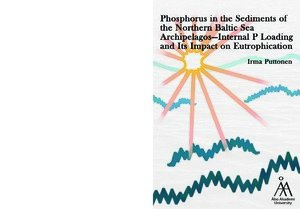 In the 20th century Eutrophication as a result of anthropogenic enrichment of nutrients has become a global problem in marine coastal waters. In the Baltic Sea, eutrophication is considered the most severe environmental problem, having various harmful consequences in the ecosystems. In the shallow northern coastal and archipelago areas, where the biodiversity is low and many species live close to the limit of their tolerance, the ecosystem is particularly sensitive to environmental stress. Despite reductions of nutrient inflow from the catchment since the 1980’s, the water quality has not improved as expected. Phosphorus (P) has accumulated in the seabed sediments due to high input from the catchment, and high levels of P in the water are maintained by P release from the sediments, i.e., the internal P loading. Phosphorus stimulates primary production, particularly intensifying blooms of nitrogen-fixing cyanobacteria.
The release of sedimentary P depends to a considerable degree on P binding in different compounds in the sediments as well as the environmental conditions in the sediments and at the sediment-water interface. The spatial and vertical distribution of different forms of P in the sediments of coastal and archipelago areas in Sweden and Finland were investigated for the first time in the extent of this thesis. The aims were to quantify the pool of potentially mobile P in the sediments of the study area of ca. 20,000 km2, to estimate the potential magnitude and spatial distribution of the internal loading of P, and to evaluate the impact of the internal loading of P on coastal eutrophication in relation to the external P input.
This study included analyses of sediment and water samples from 389 sampling stations in the study area. The sediments were analysed for total phosphorus, grain size distribution, water content and weight loss on ignition (LOI) to estimate the organic content. Phosphorus was extracted into six fractions applying a sequential P fractionation method. The resulting P fractions characterise the solubility and reactivity of P compounds in the sediment. Acoustic-seismic profiling was used to obtain seabed sediment data for estimations of the coverage of different sediment types in the study area, as well as to obtain a representative sample of sediments over the entire study area.
Temporal variation of phosphorus in sinking particles was studied with cylindrical sediment traps placed in the water column. Multivariate statistics were used to investigate possible controls of P release from the sediments. The magnitude of the potential internal P loading was estimated based on the potentially mobile P fractions in the sediments, and the estimates were tested in a water quality model, which has been developed as a tool for Finnish authorities for planning water protection measures.