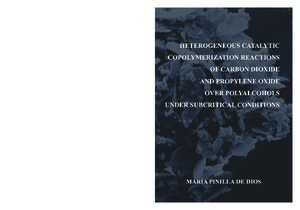 Carbon dioxide (CO2) is one of the main gases which cause the greenhouse effect. As a way to attenuate this damage, CO2 could be used as a building block for copolymerization reactions; precisely as C1 feedstock (monomer of the reaction) and as the pressurizing gas in these copolymerization reactions. The required monomer which is involved in the reactions is propylene oxide (PO) which possesses a high reactivity, enabling the CO2 bonding. Through the mechanism of ring opening polymerization (ROP), the incorporation of CO2 in the polymer chain can be possible. During this research, two different heterogeneous catalysts were used for the copolymerization reactions. Zinc glutarate (ZnGA) and double metal cyanide (DMC) were selected as plausible catalysts to perform the reactions.
The goal of this doctoral thesis is to study these heterogeneous catalysts in copolymerization reactions between PO and CO2 to understand how the catalyst and the process can be improved for a possible future industrial application.
To characterize the catalysts, several techniques were used such as Fourier transform infrared spectroscopy (FTIR and FTIR with pyridine), inductively coupled plasma optical emission spectroscopy (ICP), light scattering (with air and distilled water), nitrogen physisorption, scanning electron microscopy and energy–dispersive X-ray spectroscopy (SEM-EDX), thermogravimetric analysis-mass spectrometry (TGA-MS), X-ray photoelectron spectroscopy (XPS) and X-ray powder diffraction (XRPD).
The goal of these copolymerization reactions was to obtain a liquid CO2/propylene oxide copolymer, understanding the formation of carbonate bonds (polypropylene carbonate, PPC) and trying to minimize the cyclic propylene carbonate production (by-product, PC). Fourier transformed infrared spectroscopy (FTIR), nuclear magnetic resonance (NMR) and size exclusion chromatography (SEC) techniques were used to analyse the copolymers obtained from these reactions.
The first catalyst used for the study was zinc glutarate (ZnGA), as it is shown in Chapter 1. An exhaustive characterization of this heterogeneous catalyst was carried out with a complete study of its behaviour in copolymerization reactions.
This catalyst was synthesized by mixing zinc oxide, glutaric acid and toluene. ZnGA proved to be a catalyst without any porosity and without Brønsted and/or Lewis acid sites.
The active area was the outer surface area of the catalyst, where the Zn2+ active sites exist. In this catalyst, the average amount of Zn2+ amount was around 353 mg Zn / g catalyst. The sample was very disperse on particle sizes, showing also a rectangular plate shape morphology with an average size of 321.6 nm.
Several different reaction conditions were screened for the formation of the copolymers from propylene oxide (PO), carbon dioxide (CO2) and polypropylene glycol (as initiator, PPG of 425 g/mol). The study included changes in the amount of ZnGA (0.3, 0.6, 1.0, 1.5 g), reaction temperature (60, 80 ºC), reaction pressure (6, 25 barg), final expected molecular weight of the copolymer (725, 3000 g/mol) and the reaction time (20, 40 h).
Finally, it was possible to conclude that the best conditions corresponded to 1.5 g of catalyst, 25 barg, 80 ºC, 40 h and 3000 Da of initial PO estimation. TON (Turnover number) and TOF (Turnover frequency) values are really low which demonstrated the low activity of this catalyst.
A completely different behavior was observed when a double metal cyanide catalyst (DMC) was used.
In Chapters 2 and 3 several DMC catalysts were synthesized and characterized in order to determine which one is the most active. Chapter 2 showed the effect of varying the initial amounts of zinc chloride (ZnCl2) on the catalytic activity, in order to determine the influence of the catalyst preparation method.
Five different DMC catalysts were synthesized from zinc chloride (ZnCl2), potassium hexacyanocobaltate (III) (K3[Co(CN)6]2), tert-butanol (tBuOH, as complexing agent (CA)) and polyethylene glycol 1000 (PEG 1000, as co-complexing agent (co-CA)). The Zn/Co ratio was changed during the synthesis, having one reagent always in excess to reveal its impact on the catalytic activity, crystallinity and other properties. The presence of K+ caused a dramatic decrease on the catalyst activity, while an increase of Zn2+ produced more agglomerations of spherical particles in the catalyst (DMC E).
Only two of the catalysts prepared were successfully activated (D and E catalysts, according the nomenclature used in this thesis). Their morphologies were lamellar with spherical particle agglomerations.
After the copolymerization reactions, all the copolymers were analysed revealing that the most active catalyst was DMC E. With DMC E it was possible to achieve a high catalytic activity (2.5 kg polymer / g catalyst) with an increased CO2 incorporation (6.7 %) and a lower production of the cyclic propylene carbonate, PC (0.3 %).
The implementation of mechanical stirrer instead of the initial magnetic one, decreased the polydispersity index (PDI) values from 5.97 and 13.09 to values around 1 to 1.1.
The results showed that it is possible to obtain shorter dispersed copolymer chains in the bulk reaction medium.
Chapter 3 was focused on the catalyst activation stage previous to the copolymerization reaction process. This catalyst was named as DMC A and it was exactly the same as the DMC E discussed in Chapter 2. This catalyst had only 0.0002 mol/ g cat of K+ while the amount of Zn was 0.0036 mol/ g catalyst. 12 experiments were carried out for this DMC catalyst activation study, modifying the amount of catalyst using 10, 20, 40 and 80 mg of DMC and 4, 8 and 18 g of propylene oxide in total.
This kind of catalyst is not a selective one and, after the reaction, high concentrations of the by-product were obtained. As the amount of DMC was increased, the PC amount also increased with the same CO2 incorporation in the final copolymer. Using only 20 mg of catalyst per batch, the reaction produced more polypropylene carbonate (PPC) and cyclic propylene carbonate (PC) with the highest values of TON and TOF and the lowest PDI value. These results were confirmed by the FTIR spectrum for 20 mg of DMC A catalyst.
Apart from these chapters, the current PhD thesis has also an appendix. The appendix shows the solubility of CO2 in different polycarbonates. Several experiments at different temperatures, trying to charge the same initial pressure, were conducted to determine how the solubility is influenced by temperature and pressure.