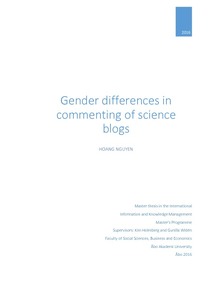 Nowadays, the public receives a lot of scientific products from such open sources, some seek information and knowledge, others access for citation work or just being interested in up-to-date scientific news. This study explores scholarly communication in the con-text of gender differences to explore the impact between public and science. To meas-ure the impact of science on various aspects of society, altmetrics as the modern metrics on social platforms is introduced and applied. Due to the potential investigation in so-cial discussions about science, science blogging is chosen to examine the public impact and differences in communication between males and females. Specifically, this re-search investigates (1) the connection between the volume of online attention and the number of blog comments, (2) typical comments on science blog entries, and (3) gender differences in commenting behavior via sentiment analysis. The results indicated that there was no connection between altmetric attention score and number of comments on blogs; and knowledge sharing is the core motivation as well as main subject of discus-sions on science blogs. In addition, the findings revealed that women are more emo-tional in comments, especially towards female blog authors, while men tend to be neu-tral in discussions, but their comments are more likely negative on blog posts of female bloggers. Ultimately, the study concludes with discussions and comparison from cur-rent findings with previous research, limitations and implications suggested for support-ing future research.