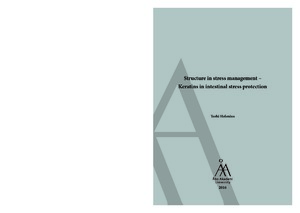 Helenius, Terhi
Åbo Akademi University
This publication is copyrighted. You may download, display and print it for Your own personal use. Commercial use is prohibited.
Näytä kaikki kuvailutiedot
Julkaisun pysyvä osoite on
http://urn.fi/URN:ISBN:978-952-12-3475-0

Intermediate filaments (IFs), a major constituent of the cellular cytoskeleton, contribute mainly to the mechanical stability of the cell. Simple epithelial keratins (SEKs) are IF proteins expressed in the single-layered and glandular epithelia of organs that involve secretion and absorption. In the colon, the main keratins (K) expressed are K7, K8, K18, K19 and K20. A new emerging role of SEKs in stress protection has been described for epithelial organs such as the liver, pancreas and kidney, where also the phosphorylation of K8 has been used as a marker of stress.
The role of K8 in intestinal stress protection was examined by studying the stress response of the K8 wild type (K8+/+), K8 heterozygous (K8+/-) and K8 knock out (K8-/-) mice. K8+/+ mice were subjected to human disease-related stresses, while K8+/- mice were examined in regards of stress protection by investigating their stress susceptibility to colitis. The stress response in K8-/- mice was studied by investigating their impaired energy metabolism in response to ketogenic situations.
As demonstrated by murine intestinal stress models, colonic keratins act as stressresponsive proteins, which are upregulated in stress and recovery. Depletion of the in vivo colonic microbiota upregulated protein levels of the main colonic keratin-pair, K8-K19, confirmed by the lipopolysaccharide (LPS)-mediated in vitro inflammational stress model. Another inflammational stress-induced keratin pair identified was the K7-K20 pair, upregulated by the experimental dextran sulphate sodium (DSS) colitis model. Except for the K7-K20 upregulation on protein level, this stress model also affected the keratin distribution by showing a wider crypt distribution of both K7 and K20 in response to stress. The role of keratins in colonic stress protection was confirmed by examining the stress susceptibility of the K8+/- mouse. The K8+/- mouse, which has 50 % less K8 compared to the K8+/+ mouse, displays hyperproliferation, longer crypts and a higher susceptibility to DSS-induced colitis when compared to K8+/+ mice, suggesting a protective role for K8 in colonic stress. In addition, by examining the K8-/- mouse in regards of stress protection, the role of K8 in colonic energy homeostasis was investigated. K8 was found to modulate the energy metabolism in colonocytes by affecting the amount of the ketogenic control enzyme, 3-hydroxy-3-methylglutaryl-CoA-synthase (HMGCS2). As a consequence of the deletion of K8 filaments, murine HMGCS2 levels were downregulted in the K8-/-mouse, together with the downregulation of the upstream short chain fatty acid (SCFA) transporter, monocarboxylate transporter isoform 1 (MCT1). Therefore, elevated K8-/- colonocyte luminal SCFAs that feed into the ketogenic pathway cannot enter the K8-/- colonocytes in sufficient amounts, leading to a decreased ketogenesis and overall ketogenic energy metabolism, contributing to the inflammatory K8-/-phenotype. When the impaired K8-/- ketogenesis was challenged with ketogenic conditions, the K8-/- mouse showed a blunted response, suggesting a protective role of K8 in the overall decreased K8-/- energy metabolism.
In conclusion, these data, as shown by the K8+/+ stress-responsive behavior, the increased DSS-susceptibility of the K8+/- mice and the blunted K8-/- ketogenesis, indicate that colonic keratins likely play an important role in the protection from intestinal stress.