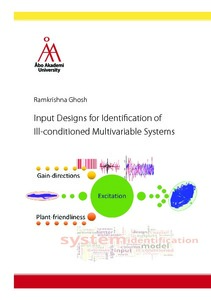 Identification of an industrial system is generally a costly and complex process. Making an identification procedure efficient enough is an ongoing demand. Typically, designing the excitation for ill-conditioned and directional systems is a challenging task. Tailor-made input excitation using process knowledge is one way to make the identification more efficient. The focus of this thesis is to develop a better identification process for multipleinput multiple-output (MIMO) systems with proper design of input excitation signals. A distillation column simulator has been constructed as a testbed for the research. Data from a real-life distillation column system have been used for calibrating the simulator.
In model-based control (e.g., model predictive control, MPC), the model quality has a critical effect on the performance of the controller. To construct a control-relevant model via identification, the system has to be excited adequately in all gain directions. In order to reduce the relative uncertainties associated with these gain directions, it is especially important to excite the system in the weak gain directions. In this study, we consider both designs by rotated signals as well as methods based on design in the frequency domain. We study multiple input design methods using basic signals like steps, PRBS, and sinusoidal signals with multiple frequencies and compare them through two case studies. The case studies are a 4 X 4 column stripper system and a 2 X 2 nonlinear distillation column system. As most of the previous studies have focused on 2 X 2 systems, a comparative study to choose the proper excitation for identification of an ill-conditioned system with more inputs and outputs (n n;n > 2) was chosen.
Practically every system has physical limitations as well as limitations due to the operation of the process. A useful measure related to input limitations is the plantfriendliness of an input signal. Several parameters that characterize the plant-friendliness are calculated and compared for the designed inputs. These parameters depend only on the inputs, not the rest of the system.
For the model identification, it is desirable that outputs are excited equally in all directions. We propose two different tools for analyzing the excitation of the outputs, namely, projections of the outputs along the gain directions and the determinant of the correlation matrix of the outputs. Both methods yield measures on how well-balanced the output distribution is. We show that experiments where the gain directions have been considered in the input design produce output data that are better balanced than output data produced by other designs. The models obtained from directional experiments perform better in cross-validation with data from other experiments than other models.