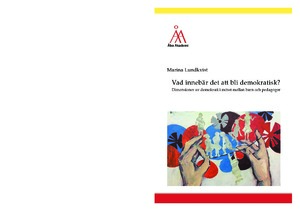 The purpose of this study is to examine aspects of democracy as they occur in the encounters between young children and educators at daycares. The research question is: what aspects are critical to differentiate when questions of democratic approaches are identified in the encounters between children ages 1–5 and educators?
The group of informants consists of children and educators from six departments of five daycares, in five different locations in the Swedishspeaking part of Finland. The total number of children included in the study is 85, and the total number of educators is 16, primarily kindergarten teachers and daycare employees. The videographic data consists of 90 hours of recorded interactions, in which children ages 1–5 interact with both each other and the educators. The material has been collected during assembly periods, free and planned activities, dining and hallway environments, as well as outdoor activities. The study is built on a qualitative, abductive, methodological approach, and is descriptive and explorative in character. The variation theory of learning, as a methodological approach, offers a frame of reference for analyzing and interpreting children´s learning. This theory also offers the researcher a frame for analysis, helping to understand how critical features of an object of learning can be differentiated in order for individuals to develop their own understanding.
By analyzing the democratic approach as an object of learning, aspects of democracy, critical aspects, and features appear. Aspects and critical features make up the object of analysis in this study. The results of the study are presented as aspects of a democratic approach, and as critical features that appear within every aspect of variation. The democratic approach is broken down into four objects of learning: participation, equality, mutuality, and respect. These are mutually dependent on one another and are possible to discern through the critical features that children and educators experience when interacting.
The study shows that interaction between children and educators contains situations where children express themselves in a democratic way, and in which educators sometimes do not capitalize on the children’s initiative to facilitate their experiencing and learning. The results show that democracy as a concept is multifaceted and complex. In order to harness this complexity in educational activities and enable young children to develop into democratic individuals with a democratic approach, educators are expected to work with this as an object of learning.