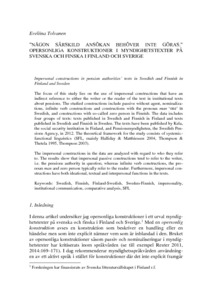 The focus of this study lies on the use of impersonal constructions that have an indirect reference to either the writer or the reader of the text in institutional texts about pensions. These include passive without agent, nominalizations, infinite verb constructions and constructions with the pronoun man ‘one’ in Swedish, and constructions with so-called zero person in Finnish. The data includes four groups of texts: texts published in Swedish and Finnish in Finland and texts published in Swedish and Finnish in Sweden. The texts have been published by Kela, the social security institution in Finland, and Pensionsmyndigheten, the Swedish Pensions Agency, in 2012. The theoretical framework for the study consists of systemicfunctional linguistics (SFL, mainly Halliday & Matthiessen 2004, Thompson & Thetela 1995, Thompson 2003). The results show that impersonal passive constructions tend to refer to the writer, i.e. the pensions authority in question, whereas infinite verb constructions, the pronoun man and zero person typically refer to the reader. Furthermore, impersonal constructions have several functions in the texts.