Online MBPeT dashboard : enabling performance testing as a service in the cloud 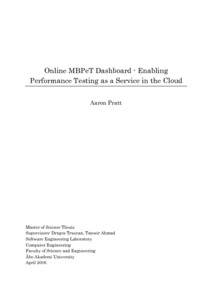 In this thesis, tool support is addressed for the combined disciplines of Model-based testing and performance testing. Model-based testing (MBT) utilizes abstract behavioral models to automate test generation, thus decreasing time and cost of test creation. MBT is a functional testing technique, thereby focusing on output, behavior, and functionality. Performance testing, however, is non-functional and is concerned with responsiveness and stability under various load conditions.

MBPeT (Model-Based Performance evaluation Tool) is one such tool which utilizes probabilistic models, representing dynamic real-world user behavior patterns, to generate synthetic workload against a System Under Test and in turn carry out performance analysis based on key performance indicators (KPI). Developed at Åbo Akademi University, the MBPeT tool is currently comprised of a downloadable command-line based tool as well as a graphical user interface. The goal of this thesis project is two-fold: 1) to extend the existing MBPeT tool by deploying it as a web-based application, thereby removing the requirement of local installation, and 2) to design a user interface for this web application which will add new user interaction paradigms to the existing feature set of the tool. All phases of the MBPeT process will be realized via this single web deployment location including probabilistic model creation, test configurations, test session execution against a SUT with real-time monitoring of user configurable metric, and final test report generation and display.

This web application (MBPeT Dashboard) is implemented with the Java programming language on top of the Vaadin framework for rich internet application development. The Vaadin framework handles the complicated web communications processes and front-end technologies, freeing developers to implement the business logic as well as the user interface in pure Java.

A number of experiments are run in a case study environment to validate the functionality of the newly developed Dashboard application as well as the scalability of the solution implemented in handling multiple concurrent users. The results support a successful solution with regards to the functional and performance criteria defined, while improvements and optimizations are suggested to increase both of these factors.