Modeling of burden distribution in the blast furnace 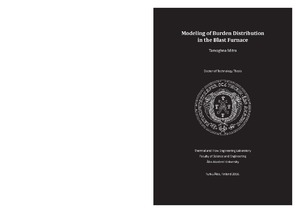 The blast furnace is the main ironmaking production unit in the world which converts iron ore with coke and hot blast into liquid iron, hot metal, which is used for steelmaking. The furnace acts as a counter-current reactor charged with layers of raw material of very different gas permeability. The arrangement of these layers, or burden distribution, is the most important factor influencing the gas flow conditions inside the furnace, which dictate the efficiency of the heat transfer and reduction processes. For proper control the furnace operators should know the overall conditions in the furnace and be able to predict how control actions affect the state of the furnace. However, due to high temperatures and pressure, hostile atmosphere and mechanical wear it is very difficult to measure internal variables. Instead, the operators have to rely extensively on measurements obtained at the boundaries of the furnace and make their decisions on the basis of heuristic rules and results from mathematical models. It is particularly difficult to understand the distribution of the burden materials because of the complex behavior of the particulate materials during charging. The aim of this doctoral thesis is to clarify some aspects of burden distribution and to develop tools that can aid the decision-making process in the control of the burden and gas distribution in the blast furnace.
A relatively simple mathematical model was created for simulation of the distribution of the burden material with a bell-less top charging system. The model developed is fast and it can therefore be used by the operators to gain understanding of the formation of layers for different charging programs. The results were verified by findings from charging experiments using a small-scale charging rig at the laboratory.
A basic gas flow model was developed which utilized the results of the burden distribution model to estimate the gas permeability of the upper part of the blast furnace. This combined formulation for gas and burden distribution made it possible to implement a search for the best combination of charging parameters to achieve a target gas temperature distribution. As this mathematical task is discontinuous and non-differentiable, a genetic algorithm was applied to solve the optimization problem. It was demonstrated that the method was able to evolve optimal charging programs that fulfilled the target conditions.
Even though the burden distribution model provides information about the layer structure, it neglects some effects which influence the results, such as mixed layer formation and coke collapse. A more accurate numerical method for studying particle mechanics, the Discrete Element Method (DEM), was used to study some aspects of the charging process more closely. Model charging programs were simulated using DEM and compared with the results from small-scale experiments. The mixed layer was defined and the voidage of mixed layers was estimated. The mixed layer was found to have about 12% less voidage than layers of the individual burden components.
Finally, a model for predicting the extent of coke collapse when heavier pellets are charged over a layer of lighter coke particles was formulated based on slope stability theory, and was used to update the coke layer distribution after charging in the mathematical model. In designing this revision, results from DEM simulations and charging experiments for some charging programs were used. The findings from the coke collapse analysis can be used to design charging programs with more stable coke layers.