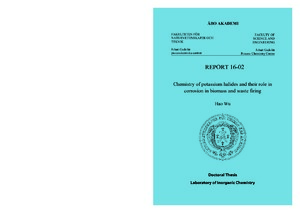 Compared to the use of traditional fossil fuels (coal, oil, natural gas), combustion of biomass and waste fuels has several environmental and economic advantages for heat and power generation. However, biomass and waste fuels might contain halogens (Cl, Br, F), alkali metals (Na, K) and heavy metals (Zn, Pb), which may cause harmful emissions and corrosion problems. Hightemperature corrosion occurs typically on furnace waterwalls and superheaters. The corrosion of the boiler tube materials limits the increase of thermal efficiency of steam boilers and leads to costly shutdowns and repairs.
In recent years, some concerns have been raised about halogen (Cl, Br, and F)-related hightemperature corrosion in biomass- and waste-fired boilers. Chlorine-related high-temperature corrosion has been studied extensively. The presence of alkali chlorides in the deposits is believed to play a major role in the corrosion observed in biomass and waste fired boilers. However, there is much less information found in literature on the corrosion effect of bromine and fluorine. According to the literature, bromine is only assumed to play a role similar to chlorine; the role of fluorine is even less understood.
In this work, a series of bubbling fluidized bed (BFB) bench-scale tests were carried out to characterize the formation and sulfation behaviors of KCl and KBr in BFB combustion conditions. Furthermore, a series of laboratory tests were carried out to investigate the hightemperature corrosion behaviors of three different superheater steels (10CrMo9-10, AISI 347 and Sanicro 28) exposed to potassium halides in ambient air and wet air (containing 30% H2O). The influence of H2O and O2 on the high-temperature corrosion of steels both with and without a salt (KCl) in three gas atmospheres (2% H2O-30% O2-N2, 2% H2O-2% O2-N2 and 30% H2O-2% O2-N2) was also studied.
From the bench-scale BFB combustion tests, it was found that HBr has a clearly higher affinity for the available K forming KBr than HCl forming KCl. The tests also indicated that KCl has a higher tendency for sulfation than KBr.
From the laboratory corrosion tests in ambient air (also called “dry air” in Paper III and Paper IV), it was found that at relatively low temperatures (≤ 550 °C) the corrosivity of KBr and KF are similar to KCl. At 600 °C, KF showed much stronger corrosivity than KBr and KCl, especially for 10CrMo9-10 and AISI 347. When exposed to KBr or KF, 10CrMo9-10 was durable at least up to 450 °C, while AISI 347 and Sanicro 28 were durable at least up to 550 °C.
From the laboratory corrosion tests in wet air (30% H2O), no obvious effect of water vapor was detected at 450 °C. At 550 °C, the influence of water vapor became significant in some cases, but the trend was not consistent. At 550 °C, after exposure with KBr, 10CrMo9-10 suffered from extreme corrosion; after exposure with KF and KCl, the corrosion was less severe, but still high. At 550 °C, local deep pitting corrosion occurred on AISI 347 and Sanicro 28 after exposure with KF. Some formation of K2CrO4 was observed in the oxide layer. At 550 °C, AISI 347 and Sanicro 28 suffered from low corrosion (oxide layer thickness of < 10 μm) after exposure with KBr and KCl. No formation of K2CrO4 was observed. Internal oxidation occurred in the cases of AISI 347 with KBr and KCl.
From the laboratory corrosion tests in three different gas atmospheres (2% H2O-30% O2-N2, 2% H2O-2% O2-N2 and 30% H2O-2% O2-N2), it was found that in tests with no salt, no corrosion occurred on AISI 347 and Sanicro 28 up to 600 °C in both the “O2-rich” (2% H2O-30% O2-N2) and “H2O-rich” (30% H2O-2% O2-N2) gas atmospheres; only 10CrMo9-10 showed increased corrosion with increasing temperature. For 10CrMo9-10 in the “O2-rich” atmosphere, the presence of KCl significantly increased the corrosion compared to the “no salt” cases. For 10CrMo9-10 in the “H2O-rich” atmosphere, the presence or absence of KCl did not show any big influence on corrosion. The formation of K2CrO4 was observed only in the case with the “O2-rich” atmosphere.
Considering both the results from the BFB tests and the laboratory corrosion tests, if fuels containing Br were to be combusted, the corrosion damage of superheaters would be expected to be higher than if the fuels contain only Cl. Information generated from these studies can be used to help the boiler manufacturers in selecting materials for the most demanding combustion systems.