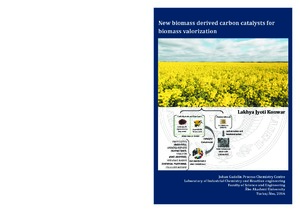 Due to diminishing petroleum reserves, unsteady market situation and the environmental concerns associated with utilization of fossil resources, the utilization of renewables for production of energy and chemicals (biorefining) has gained considerable attention. Biomass is the only sustainable source of organic compounds that has been proposed as petroleum equivalent for the production of fuels, chemicals and materials. In fact, it would not be wrong to say that the only viable answer to sustainably convene our future energy and material requirements remain with a bio-based economy with biomass based industries and products. This has prompted biomass valorization (biorefining) to become an important area of industrial research. While many disciplines of science are involved in the realization of this effort, catalysis and knowledge of chemical technology are considered to be particularly important to eventually render this dream to come true.
Traditionally, the catalyst research for biomass conversion has been focused primarily on commercially available catalysts like zeolites, silica and various metals (Pt, Pd, Au, Ni) supported on zeolites, silica etc. Nevertheless, the main drawbacks of these catalysts are coupled with high material cost, low activity, limited reusability etc. – all facts that render them less attractive in industrial scale applications (poor activity for the price). Thus, there is a particular need to develop active, robust and cost efficient catalytic systems capable of converting complex biomass molecules.
Saccharification, esterification, transesterification and acetylation are important chemical processes in the valorization chain of biomasses (and several biomass components) for production of platform chemicals, transportation fuels, food additives and materials. In the current work, various novel acidic carbons were synthesized from wastes generated from biodiesel and allied industries, and employed as catalysts in the aforementioned reactions. The structure and surface properties of the novel materials were investigated by XRD, XPS, elemental analysis, SEM, TEM, TPD and N2-physisorption techniques.
The agro-industrial waste derived sulfonic acid functionalized novel carbons exhibit excellent catalytic activity in the aforementioned reactions and easily outperformed liquid H2SO4 and conventional solid acids (zeolites, ion-exchange resins etc). The experimental results indicated strong influence of catalyst pore-structure (pore size, pore-volume), concentration of –SO3H groups and surface properties in terms of the activity and selectivity of these catalysts. Here, a large pore catalyst with high –SO3H density exhibited the highest esterification and transesterification activity, and was successfully employed in biodiesel production from fatty acids and low grade acidic oils. Also, a catalyst decay model was proposed upon biodiesel production and could explain that the catalyst loses its activity mainly due to active site blocking by adsorption of impurities and by-products.
The large pore sulfonated catalyst also exhibited good catalytic performance in the selective synthesis of triacetin via acetylation of glycerol with acetic anhydride and out-performed the best zeolite H-Y with respect to reusability. It also demonstrated equally good activity in acetylation of cellulose to soluble cellulose acetates, with the possibility to control cellulose acetate yield and quality (degree of substitution, DS) by a simple adjustment of reaction time and acetic anhydride concentration.
In contrast, the small pore and highly functionalized catalysts obtained by hydrothermal method and from protein rich waste (Jatropha de-oiled waste cake, DOWC), were active and selective in the esterification of glycerol with fatty acids to monoglycerides and saccharification of cellulosic materials, respectively. The operational stability and reusability of the catalyst was found to depend on the stability of –SO3H function (leaching) as well as active site blocking due to adsorption of impurities during the reaction. Thus, our results corroborate the potential of DOWC derived sulfated mesoporous active carbons as efficient integrated solid acid catalysts for valorization of biomass to platform chemicals, biofuel, bio-additive, surfactants and celluloseesters.