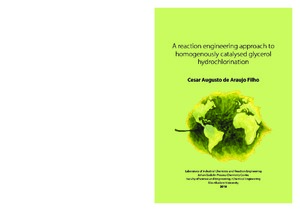 The production of biodiesel through transesterification has created a surplus of glycerol on the international market. In few years, glycerol has become an inexpensive and abundant raw material, subject to numerous plausible valorisation strategies. Glycerol hydrochlorination stands out as an economically attractive alternative to the production of biobased epichlorohydrin, an important raw material for the manufacturing of epoxy resins and plasticizers.
Glycerol hydrochlorination using gaseous hydrogen chloride (HCl) was studied from a reaction engineering viewpoint. Firstly, a more general and rigorous kinetic model was derived based on a consistent reaction mechanism proposed in the literature. The model was validated with experimental data reported in the literature as well as with new data of our own.
Semi-batch experiments were conducted in which the influence of the stirring speed, HCl partial pressure, catalyst concentration and temperature were thoroughly analysed and discussed. Acetic acid was used as a homogeneous catalyst for the experiments. For the first time, it was demonstrated that the liquid-phase volume undergoes a significant increase due to the accumulation of HCl in the liquid phase. Novel and relevant features concerning hydrochlorination kinetics, HCl solubility and mass transfer were investigated. An extended reaction mechanism was proposed and a new kinetic model was derived. The model was tested with the experimental data by means of regression analysis, in which kinetic and mass transfer parameters were successfully estimated. A dimensionless number, called Catalyst Modulus, was proposed as a tool for corroborating the kinetic model.
Reactive flash distillation experiments were conducted to check the commonly accepted hypothesis that removal of water should enhance the glycerol hydrochlorination kinetics. The performance of the reactive flash distillation experiments were compared to the semi-batch data previously obtained. An unforeseen effect was observed once the water was let to be stripped out from the liquid phase, exposing a strong correlation between the HCl liquid uptake and the presence of water in the system. Water has revealed to play an important role also in the HCl dissociation: as water was removed, the dissociation of HCl was diminished, which had a retarding effect on the reaction kinetics. In order to obtain a further insight on the influence of water on the hydrochlorination reaction, extra semi-batch experiments were conducted in which initial amounts of water and the desired product were added. This study revealed the possibility to use the desired product as an ideal “solvent” for the glycerol hydrochlorination process.
A co-current bubble column was used to investigate the glycerol hydrochlorination process under continuous operation. The influence of liquid flow rate, gas flow rate, temperature and catalyst concentration on the glycerol conversion and product distribution was studied. The fluid dynamics of the system showed a remarkable behaviour, which was carefully investigated and described. Highspeed camera images and residence time distribution experiments were conducted to collect relevant information about the flow conditions inside the tube. A model based on the axial dispersion concept was proposed and confronted with the experimental data. The kinetic and solubility parameters estimated from the semi-batch experiments were successfully used in the description of mass transfer and fluid dynamics of the bubble column reactor.
In light of the results brought by the present work, the glycerol hydrochlorination reaction mechanism has been finally clarified. It has been demonstrated that the reactive distillation technology may cause drawbacks to the glycerol hydrochlorination reaction rate under certain conditions. Furthermore,
continuous reactor technology showed a high selectivity towards monochlorohydrins, whilst semibatch technology was demonstrated to be more efficient towards the production of dichlorohydrins. Based on the novel and revealing discoveries brought by the present work, many insightful suggestions are made towards the improvement of the production of αγ-dichlorohydrin on an industrial scale.