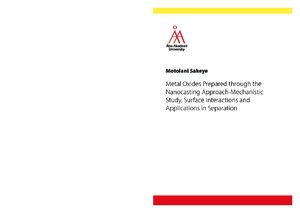 Mesoporous metal oxides are nowadays widely used in various technological applications, for instance in catalysis, biomolecular separations and drug delivery. A popular technique used to synthesize mesoporous metal oxides is the nanocasting process. Mesoporous metal oxide replicas are obtained from the impregnation of a porous template with a metal oxide precursor followed by thermal treatment and removal of the template by etching in NaOH or HF solutions. In a similar manner to the traditional casting wherein the product inherits the features of the mold, the metal oxide replicas are supposed to have an inverse structure of the starting porous template. This is however not the case, as broken or deformed particles and other structural defects have all been experienced during nanocasting experiments. Although the nanocasting technique is widely used, not all the processing steps are well understood. Questions over the fidelity of replication and morphology control are yet to be adequately answered. This work therefore attempts to answer some of these questions by elucidating the nanocasting process, pin pointing the crucial steps involved and how to harness this knowledge in making wholesome replicas which are a true replication of the starting templates.
The rich surface chemistry of mesoporous metal oxides is an important reason why they are widely used in applications such as catalysis, biomolecular separation, etc. At times the surface is modified or functionalized with organic species for stability or for a particular application. In this work, nanocast metal oxides (TiO2, ZrO2 and SnO2) and SiO2 were modified with amino-containing molecules using four different approaches, namely (a) covalent bonding of 3-aminopropyltriethoxysilane (APTES), (b) adsorption of 2-aminoethyl dihydrogen phosphate (AEDP), (c) surface polymerization of aziridine and (d) adsorption of poly(ethylenimine) (PEI) through electrostatic interactions. Afterwards, the hydrolytic stability of each functionalization was investigated at pH 2 and 10 by zeta potential measurements. The modifications were successful except for the AEDP approach which was unable to produce efficient amino-modification on any of the metal oxides used. The APTES, aziridine and PEI amino-modifications were fairly stable at pH 10 for all the metal oxides tested while only AZ and PEI modified-SnO2 were stable at pH 2 after 40 h. Furthermore, the functionalized metal oxides (SiO2, Mn2O3, ZrO2 and SnO2) were packed into columns for capillary liquid chromatography (CLC) and capillary electrochromatography (CEC). Among the functionalized metal oxides, aziridinefunctionalized SiO2, (SiO2-AZ) showed good chemical stability, and was the most useful packing material in both CLC and CEC.
Lastly, nanocast metal oxides were synthesized for phosphopeptide enrichment which is a technique used to enrich phosphorylated proteins in biological samples prior to mass spectrometry analysis. By using the nanocasting technique to prepare the metal oxides, the surface area was controlled within a range of 42-75 m2/g thereby enabling an objective comparison of the metal oxides. The binding characteristics of these metal oxides were compared by using samples with different levels of complexity such as synthetic peptides and cell lysates. The results show that nanocast TiO2, ZrO2, Fe2O3 and In2O3 have comparable binding characteristics. Furthermore, In2O3 which is a novel material in phosphopeptide enrichment applications performed comparably with standard TiO2 which is the benchmark for such phosphopeptide enrichment procedures. The performance of the metal oxides was explained by ranking the metal oxides according to their isoelectric points and acidity.
Overall, the clarification of the nanocasting process provided in this work will aid the synthesis of metal oxides with true fidelity of replication. Also, the different applications of the metal oxides based on their surface interactions and binding characteristics show the versatility of metal oxide materials. Some of these results can form the basis from which further applications and protocols can be developed.