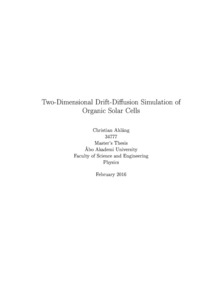 Ahläng, Christian
This publication is copyrighted. You may download, display and print it for Your own personal use. Commercial use is prohibited.
Näytä kaikki kuvailutiedot
Julkaisun pysyvä osoite on
http://urn.fi/URN:NBN:fi-fe201604199924

The aim of this master's thesis is to develop a two-dimensional drift-di usion model, which describes charge transport in organic solar cells. The main bene t of a two-dimensional model compared to a one-dimensional one is the inclusion of the nanoscale morphology of the active layer of a bulk heterojunction solar cell. The developed model was used to study recombination dynamics at the donor-acceptor interface. In some cases, it was possible to determine e ective parameters, which reproduce the results of the two-dimensional model in the one-dimensional case. A summary of the theory of charge transport in semiconductors was presented and discussed in the context of organic materials. Additionally, the normalization and discretization procedures required to nd a numerical solution to the charge transport problem were outlined. The charge transport problem was solved by implementing an iterative scheme called successive over-relaxation. The obtained solution is given as position-dependent electric potential, free charge carrier concentrations and current densities in the active layer. An interfacial layer, separating the pure phases, was introduced in order to describe charge dynamics occurring at the interface between the donor and acceptor. For simplicity, an e ective generation of free charge carriers in the interfacial layer was implemented. The pure phases simply act as transport layers for the photogenerated charges. Langevin recombination was assumed in the two-dimensional model and an analysis of the apparent recombination rate in the one-dimensional case is presented. The recombination rate in a two-dimensional model is seen to e ectively look like reduced Langevin recombination at open circuit. Replicating the J-U curves obtained in the two-dimensional model is, however, not possible by introducing a constant reduction factor in the Langevin recombination rate. The impact of an acceptor domain in the pure donor phase was investigated. Two cases were considered, one where the acceptor domain is isolated and another where it is connected to the bulk of the acceptor. A comparison to the case where no isolated domains exist was done in order to quantify the observed reduction in the photocurrent. The results show that all charges generated at the isolated domain are lost to recombination, but the domain does not have a major impact on charge transport. Trap-assisted recombination at interfacial trap states was investigated, as well as the surface dipole caused by the trapped charges. A theoretical expression for the ideality factor n_id as a function of generation was derived and shown to agree with simulation data. When the theoretical expression was fitted to simulation data, no interface dipole was observed.