The role of keratin intermediate filaments in the colon epithelial cells 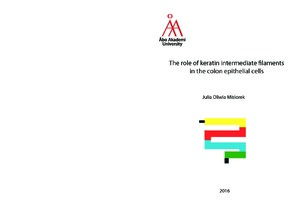 Keratins (K) are cytoskeletal proteins mainly expressed in the epithelium and constitute the largest subgroup of intermediate filaments (IFs). Simple epithelial keratins (SEKs) K7-K8 and K18-K20 are the major IF elements in the colon. SEK mutations are known to cause around 30 human diseases, mainly affecting liver and skin. However, so far no strong associations between K8 mutations and the development of human colitis have been found. The keratin contribution to colonic health comes from the K8 knock-out (K8-/-) mouse model, which develops an early chronic inflammation and hyperproliferation in the colon. The aim of this thesis was to investigate how keratins contribute to intestinal health and disease mainly by the experimental analysis using the K8-/- mouse colon and cell culture models. The work described here is divided into three studies. The first study revealed involvement of keratins in Notch1 signaling, which is the master regulator of cell fate in the colon. Immunoprecipitation and immunostaining, both in vitro and in vivo showed that K8 binds and co-localizes with Notch1. Interestingly, overexpression of keratins enhanced Notch1 levels and stabilized Notch intracellular domain (NICD), leading to higher activity of Notch signaling. The dramatic decrease in Notch activity in the K8-/- colon resulted in a differentiation shift towards goblet and enteroendocrine cells. The second study focused on the involvement of keratins in colitis-associated cancer (CAC). Although, the K8-/- inflamed colon did not develop colorectal cancer (CRC) spontaneously, it was dramatically more susceptible to induced CRC in two CRC models: azoxymethane (AOM) and multiple intestinal neoplasia (ApcMin/+). To understand how the loss of K8 contributes to CAC, the epithelial inflammasome signaling pathway was analyzed. The released component of active inflammasome, cleaved caspase-1 and its downstream protein, interleukin (IL)-18, were significantly increased in K8-/- and K8-/-ApcMin/+ colons. The inflammasome pathway has recently been suggested to control the levels of IL-22 binding protein (IL-22BP), which is a negative regulator of IL-22 activity. Interestingly, the activated inflammasome correlated with an upregulation of IL-22 and a complete loss of IL-22BP in the K8-null colons. The activation of IL-22 was confirmed by increased levels of downstream signaling, which is phosphorylated signal transducer and activator of transcription 3 (P-STAT3), a transcription factor promoting proliferation and tissue regeneration in the colon. The objective of the third study, was to examine the role of keratins in colon energy metabolism. A proteomic analysis identified mitochondrial 3-hydroxy-3-methylglutaryl-CoA synthase 2 (HMGCS2) as the major ownregulated protein in the K8-/- colonocytes. HMGCS2 is the rate-limiting enzyme in ketogenesis, where energy from bacterially produced short chain fatty acids (SCFAs), mainly butyrate, is converted into ketone bodies in colonic epithelium. Lower levels and activity of HMGCS2 in the K8-/- colon resulted in a blunted ketogenesis. The studies upstream from HMGCS2, identified decreased levels of the SCFA-transporter monocarboxylate transporter 1 (MCT1), which led to increased SCFA content in the stool suggesting impaired butyrate transport through the colonic epithelium. Taken together, the results of the herein thesis indicate that keratins are essential regulators of colon homeostasis, in particular epithelial differentiation, tumorigenesis and energy metabolism.