Nanoclustering augmentation : a novel mechanism of Ras activation in cancer 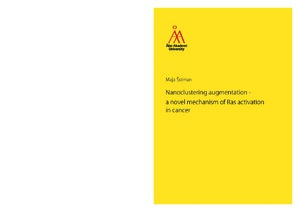 Proteins of the Ras family are central regulators of crucial cellular processes, such as proliferation, differentiation and apoptosis. Their importance is emphasized in cancer, in which the isoforms H-ras, N-ras and K-ras are misregulated by mutations in approximately 20 – 30 % of cases. Thus, they represent major cancer oncogenes and one of the most important targets for cancer drug development. Ras proteins are small GTPases, which cycle between the GTP-bound active and GDP-bound inactive state. Despite the tremendous research conducted in the last three decades, many fundamental properties of Ras proteins remain poorly understood. For instance, although new concepts have recently emerged, the understanding of Ras behavior in its native environment, the membrane, is still largely missing. On the membrane Ras organizes into nanoscale clusters, also called nanoclusters. They differ between isoforms, but also between activation states of Ras. It is considered that nanoclusters represent the basic Ras signaling units. Recently, it was demonstrated that on the membrane Ras adopts distinct conformations, the so-called orientations, which are dependent on the Ras activations state. The membrane-orientation of H-ras is stabilized by the helix α4 and the C-terminal hypervariable region (hvr). The novel switch III region was proposed to be involved in mediating the change between different H-ras orientations. When the regions involved in this mechanism are mutated, H-ras activity is changed by an unknown mechanism.
This thesis has explained the connection between the change of Ras orientation on the membrane and Ras activity. We demonstrated that H-ras orientation mutants exhibit altered diffusion properties on the membrane, which reflect the changes in their nanoclustering. The altered nanoclustering consequently rules the activity of the mutants. Moreover, we demonstrated that specific cancer-related mutations, affecting the switch III region of different Ras isoforms, exhibit increased nanoclustering, which consequently leads to stronger Ras signaling and tumorigenicity. Thus, we have discovered nanoclustering increase as a novel mechanism of Ras activity modulation in cancer. The molecular architecture of complexes formed on the membrane upon Ras activation is another poorly understood property of Ras. The following work has provided novel details on the regulation of Ras nanoclustering by a known H-ras-GTP nanoclustering stabilizer galectin-1 (Gal-1). Our study demonstrated that Gal-1 is not able to bind Ras directly, as it was previously proposed. Instead, its effect on H-ras-GTP nanoclustering is indirect, through binding of the effector proteins.
Collectively, our findings represent valuable novel insights in the behavior of Ras, which will help the future research to eventually develop new strategies to successfully target Ras in cancer.