Cleavages in contemporary Finland : a study on party-voter ties 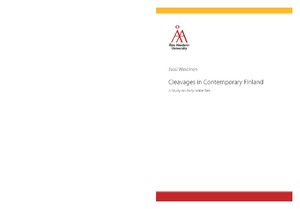 Cleavages have been central in understanding the relationship between political parties and voters but the credibility of cleavage approach has been increasingly debated. This is because of decreasing party loyalty, fewer ideological differences between the parties and general social structural change amongst other factors. By definition, cleavages arise when social structural groups recognize their clashing interests, which are reflected in common values and attitudes, and vote for parties that are dedicated to defend the interests of the groups concerned. This study assesses relevance of cleavage approach in the Finnish context. The research problem in this study is “what kind of a cleavage structure exists in Finland at the beginning of the 21st century? Finland represents a case that has traditionally been characterized by a strong and diverse cleavage structure, notable ideological fragmentation in the electorate and an ideologically diverse party system. Nevertheless, the picture of the party-voter ties in Finland still remains incomplete with regard to a thorough analysis of cleavages. In addition, despite the vast amount of literature on cleavages in political science, studies that thoroughly analyze national cleavage structures by assessing the relationship between social structural position, values and attitudes and party choice have been rare.
The research questions are approached by deploying statistical analyses, and using Finnish National Election Studies from 2003, 2007 and 2011as data. In this study, seven different social structural cleavage bases are analyzed: native language, type of residential area, occupational class, education, denomination, gender and age cohorts. Four different value/attitudinal dimensions were identified in this study: economic right and authority, regional and socioeconomic equality, sociocultural and European Union dimensions. This study shows that despite the weak overall effect of social structural positions on values and attitudes, a few rather strong connections between them were identified. The overall impact of social structural position and values and attitudes on party choice varies significantly between parties.
Cleavages still exist in Finland and the cleavage structure partly reflects the old basis in the Finnish party system. The cleavage that is based on the type of residential area and reflected in regional and socioeconomic equality dimensions concerns primarily the voters of the Centre Party and the Coalition Party. The linguistic cleavage concerns mostly the voters of the Swedish People’s Party. The classic class cleavage reflected in the regional and socioeconomic equality dimension concerns in turn first and foremost the blue-collar voters of the Left Alliance and the Social Democratic Party, the agricultural entrepreneur voters of the Centre Party and higher professional and manager voters of the Coalition Party. The conflict with the most potential as a cleavage is the one based on social status (occupational class and education) and it is reflected in sociocultural and EU dimensions. It sets the voters of the True Finns against the voters of the Green League and the Coalition Party. The study underlines the challenges the old parties have met after the volatile election in 2011, which shook the cleavage structure. It also describes the complexity involved in the Finnish conflict structure and the multidimensionality in the electoral competition between the parties.