From protein structure to function with bioinformatics 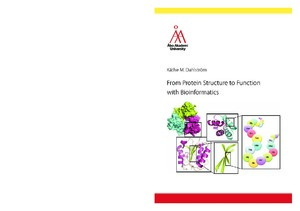 It has long been known that amino acids are the building blocks for proteins and govern their folding into specific three-dimensional structures. However, the details of this process are still unknown and represent one of the main problems in structural bioinformatics, which is a highly active research area with the focus on the prediction of three-dimensional structure and its relationship to protein function. The protein structure prediction procedure encompasses several different steps from searches and analyses of sequences and structures, through sequence alignment to the creation of the structural model. Careful evaluation and analysis ultimately results in a hypothetical structure, which can be used to study biological phenomena in, for example, research at the molecular level, biotechnology and especially in drug discovery and development.
In this thesis, the structures of five proteins were modeled with templatebased methods, which use proteins with known structures (templates) to model related or structurally similar proteins. The resulting models were an important asset for the interpretation and explanation of biological phenomena, such as amino acids and interaction networks that are essential for the function and/or ligand specificity of the studied proteins. The five proteins represent different case studies with their own challenges like varying template availability, which resulted in a different structure prediction process. This thesis presents the techniques and considerations, which should be taken into account in the modeling procedure to overcome limitations and produce a hypothetical and reliable three-dimensional structure. As each project shows, the reliability is highly dependent on the extensive incorporation of experimental data or known literature and, although experimental verification of in silico results is always desirable to increase the reliability, the presented projects show that also the experimental studies can greatly benefit from structural models. With the help of in silico studies, the experiments can be targeted and precisely designed, thereby saving both money and time. As the programs used in structural bioinformatics are constantly improved and the range of templates increases through structural genomics efforts, the mutual benefits between in silico and experimental studies become even more prominent. Hence, reliable models for protein three-dimensional structures achieved through careful planning and thoughtful executions are, and will continue to be, valuable and indispensable sources for structural information to be combined with functional data.