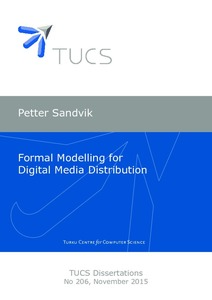 Human beings have always strived to preserve their memories and spread their ideas. In the beginning this was always done through human interpretations, such as telling stories and creating sculptures. Later, technological progress made it possible to create a recording of a phenomenon; first as an analogue recording onto a physical object, and later digitally, as a sequence of bits to be interpreted by a computer. By the end of the 20th century technological advances had made it feasible to distribute media content over a computer network instead of on physical objects, thus enabling the concept of digital media distribution.
Many digital media distribution systems already exist, and their continued, and in many cases increasing, usage is an indicator for the high interest in their future enhancements and enriching. By looking at these digital media distribution systems, we have identified three main areas of possible improvement: network structure and coordination, transport of content over the network, and the encoding used for the content. In this thesis, our aim is to show that improvements in performance, efficiency and availability can be done in conjunction with improvements in software quality and reliability through the use of formal methods: mathematical approaches to reasoning about software so that we can prove its correctness, together with the desirable properties.
We envision a complete media distribution system based on a distributed architecture, such as peer-to-peer networking, in which different parts of the system have been formally modelled and verified. Starting with the network itself, we show how it can be formally constructed and modularised in the Event-B formalism, such that we can separate the modelling of one node from the modelling of the network itself. We also show how the piece selection algorithm in the BitTorrent peer-to-peer transfer protocol can be adapted for on-demand media streaming, and how this can be modelled in Event-B. Furthermore, we show how modelling one peer in Event-B can give results similar to simulating an entire network of peers.
Going further, we introduce a formal specification language for content transfer algorithms, and show that having such a language can make these algorithms easier to understand. We also show how generating Event-B code from this language can result in less complexity compared to creating the models from written specifications. We also consider the decoding part of a media distribution system by showing how video decoding can be done in parallel. This is based on formally defined dependencies between frames and blocks in a video sequence; we have shown that also this step can be performed in a way that is mathematically proven correct.
Our modelling and proving in this thesis is, in its majority, tool-based. This provides a demonstration of the advance of formal methods as well as their increased reliability, and thus, advocates for their more wide-spread usage in the future.