The role of metal ions in selective and sustainable processes 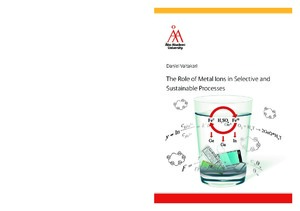 Valtakari, Daniel
Åbo Akademi University
This publication is copyrighted. You may download, display and print it for Your own personal use. Commercial use is prohibited.
Näytä kaikki kuvailutiedot
Julkaisun pysyvä osoite on
http://urn.fi/URN:NBN:fi-fe2015092914187

Sustainability and recycling are core values in today’s industrial operations. New materials, products and processes need to be designed in such a way as to consume fewer of the diminishing resources we have available and to put as little strain on the environment as possible. An integral part of this is cleaning and recycling. New processes are to be designed to improve the efficiency in this aspect.
Wastewater, including municipal wastewaters, is treated in several steps including chemical and mechanical cleaning of waters. Well-cleaned water can be recycled and reused. Clean water for everyone is one of the greatest challenges we are facing today.
Ferric sulphate, made by oxidation from ferrous sulphate, is used in water purification. The oxidation of ferrous sulphate, FeSO4, to ferric sulphate in acidic aqueous solutions of H2SO4 over finely dispersed active carbon particles was studied in a vigorously stirred batch reactor. Molecular oxygen was used as the oxidation agent and several catalysts were screened: active carbon, active carbon impregnated with Pt, Rh, Pd and Ru. Both active carbon and noble metal-active carbon catalysts enhanced the oxidation rate considerably. The order of the noble metals according to the effect was: Pt >> Rh > Pd, Ru. By the use of catalysts, the production capacities of existing oxidation units can be considerably increased. Good coagulants have a high charge on a long polymer chain effectively capturing dirty particles of the opposite charge. Analysis of the reaction product indicated that it is possible to obtain polymeric iron-based products with good coagulation properties.
Systematic kinetic experiments were carried out at the temperature and pressure ranges of 60B100°C and 4B10 bar, respectively. The results revealed that both non-catalytic and catalytic oxidation of Fe2+ to Fe3+ take place simultaneously. The experimental data were fitted to rate equations, which were based on a plausible reaction mechanism: adsorption of dissolved oxygen on active carbon, electron transfer from Fe2+ ions to adsorbed oxygen and formation of surface hydroxyls. A comparison of the Fe2+ concentrations predicted by the kinetic model with the experimentally observed concentrations indicated that the mechanistic rate equations were able to describe the intrinsic oxidation kinetics of Fe2+ over active carbon and active carbon-noble metal catalysts.
Engineering aspects were closely considered and effort was directed to utilizing existing equipment in the production of the new coagulant. Ferrous sulphate can be catalytically oxidized to produce a novel long-chained polymeric iron-based flocculent in an easy and affordable way in existing facilities. The results can be used for modelling the reactors and for scale-up.
Ferric iron (Fe3+) was successfully applied for the dissolution of sphalerite. Sphalerite contains indium, gallium and germanium, among others, and the application can promote their recovery. The understanding of the reduction process of ferric to ferrous iron can be used to develop further the understanding of the dissolution mechanisms and oxidation of ferrous sulphate.
Indium, gallium and germanium face an ever-increasing demand in the electronics industry, among others. The supply is, however, very limited. The fact that most part of the material is obtained through secondary production means that real production quota depends on the primary material production. This also sets the pricing. The primary production material is in most cases zinc and aluminium. Recycling of scrap material and the utilization of industrial waste, containing indium, gallium and geranium, is a necessity without real options.
As a part of this study plausible methods for the recovery of indium, gallium and germanium have been studied. The results were encouraging and provided information about the precipitation of these valuables from highly acidic solutions.
Indium and gallium were separated from acidic sulphuric acid solutions by precipitation with basic sulphates such as alunite or they were precipitated as basic sulphates of their own as galliunite and indiunite. Germanium may precipitate as a basic sulphate of a mixed composition. The precipitation is rapid and the selectivity is good. When the solutions contain both indium and gallium then the results show that gallium should be separated before indium to achieve a better selectivity.
Germanium was separated from highly acidic sulphuric acid solutions containing other metals as well by precipitating with tannic acid. This is a highly selective method. According to the study other commonly found metals in the solution do not affect germanium precipitation.
The reduction of ferric iron to ferrous, the precipitation of indium, gallium and germanium, and the dissolution of the raw materials are strongly depending on temperature and pH. The temperature and pH effect were studied and which contributed to the understanding and design of the different process steps. Increased temperature and reduced pH improve the reduction rate.
Finally, the gained understanding in the studied areas can be employed to develop better industrial processes not only on a large scale but also increasingly on a smaller scale. The small amounts of indium, gallium and germanium may favour smaller and more locally bound recovery.