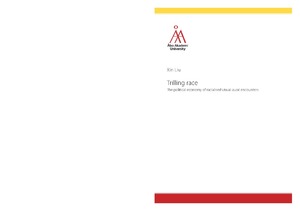 Liu, Xin
Åbo Akademis förlag - Åbo Akademi University Press
This publication is copyrighted. You may download, display and print it for Your own personal use. Commercial use is prohibited.
Näytä kaikki kuvailutiedot
Julkaisun pysyvä osoite on
http://urn.fi/URN:ISBN:978-951-765-795-2

This thesis investigates the matter of race in the context of Finnish language acquisition among adult migrants in Finland. Here matter denotes both the materiality of race and how race comes to matter. Drawing primarily on an auto/ethno/graphic account of learning the Finnish language as a participant in the Finnish for foreigners classes, this thesis problematises the ontology and epistemology of race, i.e., what race is, how it is known, and what an engagement with race entails. Taking cues from the bodily practices of learning the Finnish trill or the rolling r, this study proposes a notion of “trilling race” and argues for an onto-epistemological dis/continuity that marks race’s arrival. The notion of dis/continuity reworks the distinction between continuity and discontinuity, and asks about the how of the arrival of any identity, the where, and the when. In so doing, an analysis of “trilling race” engages with one of the major problematics that has exercised much critical attention, namely: how to read race differently. That is, to rethink the conundrum of the need to counter “representational weight” (Puar 2007, 191) of race on the one hand, and to account for the racialised lived realities on the other.
The link between a study of the phenomenon of host country language acquisition and an examination of the question of race is not as obvious as it might seem. For example, what does the argument that the process of language learning is racialised actually imply? Does it mean that race, as a process of racialisation or an ongoing configuration of sets of power relations, exerts force from an outside on the otherwise neutral process of learning the host country language? Or does it mean that race, as an identity category, presents as among the analytical perspectives, along with gender and class for instance, of the phenomenon of host country language acquisition?
With these questions in mind, and to foreground the examination of the question of race in the context of Finnish language acquisition among adult migrants, this thesis opens with a discussion of the art installation Finnexia by Lisa Erdman. Finnexia is a fictitious drug said to facilitate Finnish language learning through accelerating the cognitive learning process and reducing the anxiety of speaking the Finnish language. Not only does the Finnexia installation make visible the ways in which the lack of skill in Finnish is fgured as the threshold – a border that separates the inside from the outside – to integration, but also, and importantly, it raises questions about the nature of difference, and the process of differentiation that separates the individual from the social, fact from fiction, nature from culture. These puzzles animate much of the analysis in this dissertation. These concerns continue to be addressed in the rest of part one. Whereas chapter two offers a reconsideration of the ambiguities of ethnisme/ethnicity and race, chapter three dilates on the methodological implications of a conception of the dis/continuity of race. Part two focuses on the matter of race and examines the political economy of visual-aural encounters, whereas part three shifts the focus and rethinks the possibilities and limitations of transforming racialised and normative constraints. Taking up these particular problematics, this thesis as a whole argues that race trills itself: its identity/difference is simultaneously made possible and impossible.