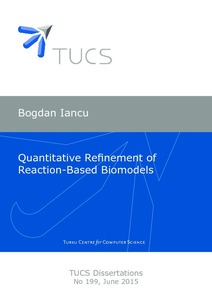 In the field of molecular biology, scientists adopted for decades a reductionist perspective in their inquiries, being predominantly concerned with the intricate mechanistic details of subcellular regulatory systems. However, integrative thinking was still applied at a smaller scale in molecular biology to understand the underlying processes of cellular behaviour for at least half a century. It was not until the genomic revolution at the end of the previous century that we required model building to account for systemic properties of cellular activity. Our system-level understanding of cellular function is to this day hindered by drastic limitations in our capability of predicting cellular behaviour to reflect system dynamics and system structures. To this end, systems biology aims for a system-level understanding of functional intraand inter-cellular activity.
Modern biology brings about a high volume of data, whose comprehension we cannot even aim for in the absence of computational support. Computational modelling, hence, bridges modern biology to computer science, enabling a number of assets, which prove to be invaluable in the analysis of complex biological systems, such as: a rigorous characterization of the system structure, simulation techniques, perturbations analysis, etc. Computational biomodels augmented in size considerably in the past years, major contributions being made towards the simulation and analysis of large-scale models, starting with signalling pathways and culminating with whole-cell models, tissue-level models, organ models and full-scale patient models. The simulation and analysis of models of such complexity very often requires, in fact, the integration of various sub-models, entwined at different levels of resolution and whose organization spans over several levels of hierarchy. This thesis revolves around the concept of quantitative model refinement in relation to the process of model building in computational systems biology. The thesis proposes a sound computational framework for the stepwise augmentation of a biomodel. One starts with an abstract, high-level representation of a biological phenomenon, which is materialised into an initial model that is validated against a set of existing data. Consequently, the model is refined to include more details regarding its species and/or reactions. The framework is employed in the development of two models, one for the heat shock response in eukaryotes and the second for the ErbB signalling pathway. The thesis spans over several formalisms used in computational systems biology, inherently quantitative: reaction-network models, rule-based models and Petri net models, as well as a recent formalism intrinsically qualitative: reaction systems. The choice of modelling formalism is, however, determined by the nature of the question the modeler aims to answer. Quantitative model refinement turns out to be not only essential in the model development cycle, but also beneficial for the compilation of large-scale models, whose development requires the integration of several sub-models across various levels of resolution and underlying formal representations.