Environmental Challenges in the Joint Border Area of Norway, Finland and Russia 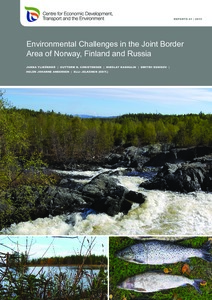 This report examines the human impact on the subarctic environment of the joint border area of Norway, Finland and Russia. The aim is to present the current state and recent changes that have taken place in the region.

The main threat to the environment is the Pechenganikel mining and metallurgical industrial combine in the towns of Nikel and Zapolyarny in the Kola Peninsula. Emissions from this complex include high levels of heavy metals, persistent organic pollutants and sulfur dioxide. Pollution, along with climate change, water level regulation and other anthropogenic effects, has affected the aquatic ecosystems in the joint border area.

The main heavy metals in the area are copper and nickel, the highest concentrations of which are measured near the combine. Direct discharge of sewage into the river continues and airborne heavy metal particles are also deposited to areas farther away. Climate changeinduced increase in temperature and precipitation in the Kola Peninsula is evident. Water level regulation with seven hydropower plants in the Pasvik River have changed it into a series of lakes and lake-like reservoirs.

This report discusses modelling, which was enabled to estimate the effect of climate change on Lake Inarijärvi and the Pasvik River hydrology, water level fluctuation and ecology and to follow the sulfur dioxide emissions emitted from the Pechenganikel. Effects of pollution on the nature and concentrations of the main pollutants were studied and climate change in the border area and its effects on the ecology were estimated. Also the effects of water level regulation on the ecological status of the aquatic ecosystems were addressed.