Westerners in search of the legendary potion : ayahuasca travel in the borderland between tourism and pilgrimage 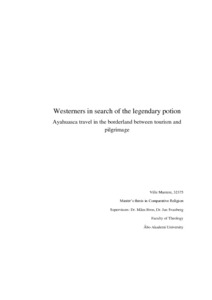 Mantere, Ville
Åbo Akademi University
This publication is copyrighted. You may download, display and print it for Your own personal use. Commercial use is prohibited.
Näytä kaikki kuvailutiedot
Julkaisun pysyvä osoite on
http://urn.fi/URN:NBN:fi-fe201402261595

The thesis examines the phenomenon most commonly known as “ayahuasca tourism” – i.e. the practice of westerners traveling to South America and partaking in ceremonies in which a powerful entheogenic brew, ayahuasca, is consumed. While this popular phenomenon has been steadily increasing during the last decades, it has, however, been insufficiently studied by scholars. An important question which has not been properly addressed in earlier studies is how ayahuasca tourism relates to the wider occurrence of travel and how it should be perceived with reference to the theoretical frameworks on the subject of travel. Drawing on theories regarding pilgrimage and tourism, the main purpose of this thesis is to examine the relationship between ayahuasca tourism and the broader spectrum of travel. In particular, the study tests the designations “pilgrimage”, “religious tourism” and “spiritual tourism” with reference to ayahuasca tourism. Utilizing earlier literature as well as ayahuasca tourists‟ reports obtained from an Internet forum as a basis for analysis, I search for a suitable terminology to be used for the phenomenon. The study lays special emphasis on the protagonists‟ motivations, experiences and outcomes in order to take note of various aspects of the wide-ranging occurrence of ayahuasca tourism.
Key findings indicate that ayahuasca tourism is best understood as a combination of pilgrimage and tourism. On the basis of the analysis I argue that ayahuasca tourism should be labeled as “pilgrimage” and/or “spiritual tourism”, and the tourists respectively as “pilgrims” and/or “spiritual tourists”. The category of “religious tourism/tourist”, on the other hand, turns out to be an inappropriate designation when describing the phenomenon. In general, through my study I show that the results are consistent with the present trend in the study of travel to perceive pilgrimage and tourism as theoretically similar phenomena. The study of ayahuasca tourism serves thus as living proof of contemporary travel, in which the categories of pilgrimage and tourism are often indistinguishable. I suggest that ayahuasca tourism is by no means exceptional on this point, but can rather be used as an illustration of modern travel forms on a general level. Thus, the present study does not only add to the research of ayahuasca tourism, but also provides additional insights into the study of travel.