Iron(III) as Lewis acid catalyst in organosilicon and carbonyl chemistry 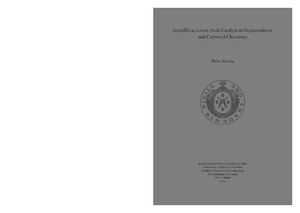 Iron is one of the most common elements in the earth’s crust and thus its availability and economic viability far exceed that of metals commonly used in catalysis. Also the toxicity of iron is miniscule, compared to the likes of platinum and nickel, making it very desirable as a catalyst. Despite this, prior to the 21st century, the applicability of iron in catalysis was not thoroughly investigated, as it was considered to be inefficient and unselective in desired transformations. In this doctoral thesis, the application of iron catalysis in combination with organosilicon reagents for transformations of carbonyl compounds has been investigated together with insights into iron catalyzed chlorination of silanes and silanols.
In the first part of the thesis, the synthetic application of iron(III)-catalyzed chlorination of silanes (Si-H) and the monochlorination of silanes (SiH2) using acetyl chloride as the chlorine source is described. The reactions proceed under ambient conditions, although some compounds need to be protected from excess moisture. In addition, the mechanism and kinetics of the chlorination reaction are briefly adressed.
In the second part of this thesis a versatile methodology for transformation of carbonyl compounds into three different compound classes by changing the conditions and amounts of reagents is discussed. One pot reductive benzylation, reductive halogenation and reductive etherification of ketones and aldehydes using silanes as the reducing agent, halide source or cocatalyst, were investigated. Also the reaction kinetics and mechanism of the reductive halogenation of acetophenone are briefly discussed.