From genotype to phenotype : diversity and population structure of Flavobacterium psychrophilum 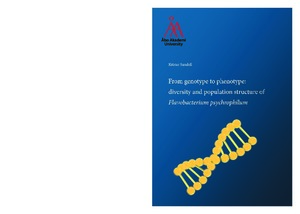 Flavobacterium psychrophilum is the etiological agent of bacterial cold-water disease (BCWD) causing high fish mortalities and significant economic losses to the freshwater salmonid aquaculture industry around the world. Today BCWD outbreaks are mainly treated with environmentally hazardous antimicrobial agents and alternative preventative measures are urgently needed in order to ensure the well-being of animals and the sustainability of aquaculture. The diversity of pathogenic bacteria challenges the development of universal control strategies and in many cases the pathogen population structure, i.e. the total genetic diversity of the species must be taken into account. This work integrates the tools of modern molecular biology and conventional phenotypic microbiology to gain knowledge about the diversity and population structure of F. psychrophilum. The present work includes genetic characterization of a large collection of isolates collected from diverse origins and years, from aquaculture in a whole region including different countries, and provides the first international validation of a universal multilocus sequence typing (MLST) approach for unambiguous genetic typing of F. psychrophilum. Population structure analyses showed that the global F. psychrophilum population is subdivided into pathogenic species-specific clones, of which one particular genetic lineage, clonal complex CC-ST2, has been responsible for the majority of BCWD outbreaks in rainbow trout (Oncorhynchus mykiss) in European aquaculture facilities over several decades. Genotypic and phenotypic population heterogeneity affecting antimicrobial resistance in F. psychrophilum within BCWD outbreaks was discovered. Specific genotypes were associated with severe infections in farmed rainbow trout and Atlantic salmon (Salmo salar), and in addition to high adherence, antimicrobial resistance was strongly associated with outbreak strains. The study brought additional support for the hypothesis of an epidemic F. psychrophilum population structure, where recombination is an important force for the generation and maintenance of genetic diversity, and a significant contribution towards mapping the genetic diversity of this important fish pathogen. Evidence indicating dissemination of virulent strains with commercial movement of fish and fish products was strengthened.