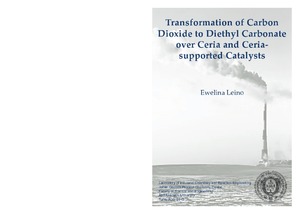 Carbon dioxide is regarded, nowadays, as a primary anthropogenic greenhouse gas leading to global warming. Hence, chemical fixation of CO2 has attracted much attention as a possible way to manufacture useful chemicals. One of the most interesting approaches of CO2 transformations is the synthesis of organic carbonates. Since conventional production technologies of these compounds involve poisonous phosgene and carbon monoxide, there is a need to develop novel synthetic methods that would better match the principles of "Green Chemistry" towards protection of the environment and human health.
Over the years, synthesis of dimethyl carbonate was under intensive investigation in the academia and industry. Therefore, this study was entirely directed towards equally important homologue of carbonic esters family namely diethyl carbonate (DEC). Novel synthesis method of DEC starting from ethanol and CO2 over heterogeneous catalysts based on ceria (CeO2) was studied in the batch reactor. However, the plausible drawback of the reaction is thermodynamic limitations. The calculated values revealed that the reaction is exothermic (ΔrHØ298K = ─ 16.6 J/ ) and does not occur spontaneously at rooms temperature (ΔrGØ 298K = 35.85 kJ/mol). Moreover, co-produced water easily shifts the reaction equilibrium towards reactants excluding achievement of high yields of the carbonate. Therefore, in-situ dehydration has been applied using butylene oxide as a chemical water trap. A 9-fold enhancement in the amount of DEC was observed upon introduction of butylene oxide to the reaction media in comparison to the synthetic method without any water removal. This result confirms that reaction equilibrium was shifted in favour of the desired product and thermodynamic boundaries of the reaction were suppressed by using butylene oxide as a water scavenger.
In order to obtain insight into the reaction network, the kinetic experiments were performed over commercial cerium oxide. On the basis of the selectivity/conversion profile it could be concluded that the one-pot synthesis of diethyl carbonate from ethanol, CO2 and butylene oxide occurs via a consecutive route involving cyclic carbonate as an intermediate.
Since commercial cerium oxide suffers from the deactivation problems already after first reaction cycle, in-house CeO2 was prepared applying room temperature precipitation technique. Variation of the synthesis parameters such as synthesis time, calcination temperature and pH of the reaction solution turned to have considerable influence on the physico-chemical and catalytic properties of CeO2. The increase of the synthesis time resulted in high specific surface area of cerium oxide and catalyst prepared within 50 h exhibited the highest amount of basic sites on its surface. Furthermore, synthesis under pH 11 yielded cerium oxide with the highest specific surface area, 139 m2/g, among all prepared catalysts. Moreover, CeO2─pH11 catalyst demonstrated the best catalytic activity and 2 mmol of DEC was produced at 180 oC and 9 MPa of the final reaction pressure.
In addition, ceria-supported onto high specific surface area silicas MCM-41, SBA-15 and silica gel were synthesized and tested for the first time as catalysts in the synthesis of DEC. Deposition of cerium oxide on MCM-41 and SiO2 supports resulted in a substantial increase of the alkalinity of the carrier materials. Hexagonal SBA-15 modified with 20 wt % of ceria exhibited the second highest basicity in the series of supported catalysts. Evaluation of the catalytic activity of ceria-supported catalysts showed that reaction carried out over 20 wt % CeO2-SBA-15 generated the highest amount of DEC.