Nichesourcing the Uralic Languages for the Benefit of Research and Societies 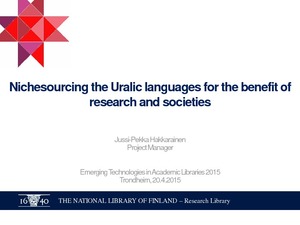 Presentation of Jussi-Pekka Hakkarainen, held at the Emtacl15 conference on the 20th of April 2015 in Trondheim, Norway.

The emerging technologies have challenged the libraries to reconsider their role as a mere mediator between the collections, researchers and wider audiences. Facing the challenge, the Digitization Project of Kindred Languages (National Library of Finland) has intentionally taken a new role as a node that connects the partners to interplay and work for shared goals and objectives. This paper discusses the crowdsourcing methods and tools that have been established during the project to support both linguistic research and lingual diversity.
The Digitization Project of Kindred Languages seeks to digitize and publish more than 1200 monograph and ca. 100 newspapers titles in various, and in some cases, endangered Uralic languages. The Fenno-Ugrica online collection will consist of 110,000 monograph and 90,000 newspaper pages to which all users will have open access regardless of their place of residence. The project is also engaged to support a culture of openness and interaction in linguistic research, but also promote citizen science as a tool for the participation of the language community in research. How does the library meet the objectives, which appears to be beyond its traditional playground? Could the crowd do the work to support the academic research?
The downsides of traditional crowdsourcing become more imminent when you leave the Anglophone world. Often the targets in crowdsourcing have been split into several microtasks that do not require any special skills from the anonymous people, a faceless crowd. This way of crowdsourcing may produce quantitative results, but from the research’s point of view, there is a danger that the needs of linguists are not necessarily met. Also, the remarkable downside is the lack of shared goal or social affinity. There is no reward in traditional crowdsourcing.
When using the crowd in a project whose aim is to support the endangered languages, the approach has to be a different one. In nichesourcing, the tasks are distributed amongst a small crowd of citizen scientists (communities) and although communities provide smaller pools to draw resources, their specific richness in skill is suited for the complex tasks with high-quality product expectations found in nichesourcing. These communities can correspond to research more precisely. Instead of repetitive and rather trivial tasks, we are trying to utilize the knowledge and skills of citizen scientists to provide qualitative results.
From the nichesourcing’s perspective, it is essential that altruism play a central role, when the language communities are involved. In nichesourcing, our goal is to reach a certain level of interplay, where the language communities would benefit from the results. For instance, the corrected words in Ingrian will be added to an online dictionary, which is made freely available for the public and the society can benefit too.